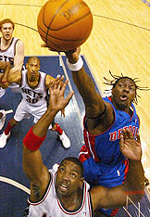 During the 1980’s, the Boston Celtics won three NBA championships with a nucleus of Larry Bird, Kevin McHale, Robert Parish and Dennis Johnson. Cedric “Cornbread” Maxwell also played an important role. Bird and McHale are now Presidents of the Indiana Pacers and Minnesota Timberwolves, and a part-time starter on some of their teams, Danny Ainge, is the President of the Boston Celtics. All three are white. The other players named above are African-American, and other than an interim coaching job given to Johnson, they were not offered coaching or front-office positions. Welcome to the racial realities of the
NBA.

The contrast between the post-career options of Celtic guards Johnson and Ainge is illustrative. Johnson was a defensive stalwart for the Seattle Supersonics before joining the Celtics. He had a reputation as an extremely smart player who had made up in hard work what he lacked in skills, particularly in regard to his shooting. Ainge, on the other hand, was that rare athlete who played major league sports in two fields, having joined the NBA after failing to become a star with the Toronto Blue Jays of the American League.

Whereas Johnson was a cool customer on the court, Ainge was a cranky complainer. Anyone looking at the two irrespective of race would have picked Johnson as more likely to have a coaching or front-office career. But in the NBA, it’s all about who you know. With all the owners but one being white (and the first African-American owner’s team has not yet started), former white players routinely get the nod over seemingly
far more qualified former black players.

Ainge got a coaching job with the Phoenix Suns soon after his career ended. He had middling success when he then suddenly announced he was quitting to spend more time with his family. He immediately got a gig as a network commentator on NBA games, another job category which until very recently has disproportionately favored former white players.

One would think that quitting a team early in a season would have put an end to Ainge’s NBA career. But last year Inge went from the announcing booth to being handed the job of President of the storied Boston Celtics. Meanwhile, Johnson had spent several years as an assistant coach. He finally got his chance late in the 2002-03 season to be an interim head coach for the woeful Los Angeles Clippers.

The season was a lost cause for the Clippers by the time Johnson took over, but it seemed he would finally get a permanent head coaching job. But just prior to the start of the current season, the Clippers replaced Johnson with Mike Dunleavy. Dunleavy had previously coached the Lakers, Trail Blazers, and Bucks, having failed to succeed in each case despite having good talent.

But according to the unwritten rules for the NBA, a mediocre former white player must get multiple opportunities before someone like Dennis Johnson or former Warrior Clifford Ray gets one.

When former black players are hired, it is almost always with bad to mediocre teams. And they are given a very short leash. For example, former USF star Bill Cartwright did well for the Chicago Bulls his first season but was fired early in his second. He was replaced by Scott Skiles, who fits the stereotype of a former white player whose failure in his previous NBA coaching stint still puts him ahead of former black players who have never gotten a shot.

When Kevin McHale became President of the Timberwolves, he made his friend Flip Saunders the coach. Saunders is not a bad coach, and may even be a good coach—but there is no way a black coach is allowed to stay year in and year out without winning a playoff series. That’s not patience, it’s the old white boy’s network.

When Bird took over the Pacers, he fired Isaiah Thomas and replaced him with his white sidekick from the Celtics, Rick Carlisle.

Carlisle mostly sat on the bench with the Celtics, but clearly made a friendship that helped down the line. Carlisle is a solid coach, but one must ask why none of the African-American players on those Celtic teams ever got a similar chance to show their excellence.

The NBA has such a high-percentage of African-American players that a fear regularly emerges that white fans will not watch or attend the games. Installing white coaches and front-office executives is a strategy for balancing the racial composition of the sport.

African-Americans are making big bucks in the NBA and are not about to publicly attack the league’s post-career hiring policies.

But if you want to find some justice in the Warriors ongoing failures, the franchise has not had a permanent black coach since Al Attles in the 1970’s and its front-office and announcing staff has been all-white during the past decade. The team is an insult to the Bay Area beyond its sad performance on the courts.