Rabbi’s World Series Prediction: Anybody But the Cubs! 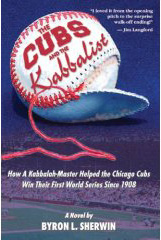 The Book of Exodus dutifully records 10 plagues, but Rabbi Byron Sherwin knows there are really 11. Plague No. 11 is something of a mishmash of blood, boils and, of course, wild beasts: being a fan of the Chicago Cubs. “Calling my wife a Cubs fanatic would be an understatement. And during a Seder five or six years ago, she kept leaving the table and we could hear her cursing and yelling and throwing things. And one of our guests, a physician, asked if dinner wasn’t going well and she was angry. But I said no, no, she’s just watching the Cubs game. And, as usual, they’re losing,” recalled Rabbi Byron Sherwin, a Chicago religious scholar and author.

He’s visited the Bay Area many times (perhaps not coincidentally when the Cubbies were in town), most recently to lead services at Walnut Creek’s B’nai Shalom during High Holy Day services this year.

Sherwin’s Passover guest made a suggestion the rabbi would take to heart: “He said he knew of no medical remedy for this, but maybe I knew a Kabbalistic remedy.”

And, in a way, Sherwin did. He penned a novel in which a rabbi who specializes in Kabbalah (like him) is married to a lawyer who obsesses over the Cubs (like his wife) and the rabbi strives to “cure her from this terrible affliction.”

Sherwin released his book, “The Cubs and the Kabbalist” in April; in it the rabbi removes several curses on the team in Kabbalistic fashion, leaving the Northside Boys free and clear to win their first World Series since 1908. Former Cubs President Andy McPhail dismissed the concept as asinine * and then promptly guided the team to a putrid 66-96 record before stepping down this month.

The baseball fan’s rallying cry of “Wait ’till next year!” has long carried the sweet taste of snail bait for Cubs fans * next year the team has invariably stunk, too. In contrast to the agonies of the Boston Red Sox, who came oh so painfully close to snatching the crown during their 86 years of futility, the Cubs have, with rare exceptions, emanated an odor for the past 99 seasons befitting a city once known as the “Hog butcher to the world.”

“The conclusion I have come to is that they’re cursed. There’s no other possible explanation,” concluded Sherwin a professor at Chicago’s Spertus Institute of Jewish Studies. The Cubbies last appeared in a World Series in 1945, falling to the Detroit Tigers in seven hard-fought games. While popular folklore holds that tavern-keeper Vasili “Billy Goat” Sianis placed a curse on the team when they refused to let him take his stinky goat into the game with him (go figure), Sherwin sees things differently.

He believes the Cubs’ anti-Semitism damned them to collapse down the stretch in ’69 to the Miracle Mets (don’t bring this one up around any Chicagoan), hit the ground face-first vs. Steve Garvey and the Padres in ’84, feel the wrath of Will Clark and the Giants in ’89 and suffer, literally, at the hand of Jewish fan Steve Bartman in 2003.

The star player of the ’45 Tigers, as any Jewish fan well knows, was Hank Greenberg. Greenberg, whose features could be modestly described as “Semitic” was mercilessly hounded from the Cubs’ bench and the stands during that series, which Sherwin feels was far more fateful than any mythical curse placed by a Greek immigrant and his goat.

But the Cubs’ curse goes even deeper than that. Sherwin claims the team initiated its own suffering back in 1932 (the World Series where Babe Ruth allegedly called his shot to center field off pitcher Charlie Root); fans and players ragged the Bambino ceaselessly because he supposedly had black relatives (less known among casual fans than Ruth’s larger-than-life exploits is one of his nicknames: Niggerlips).

In Sherwin’s book, the rabbi Kabbalistically removes curses on Wrigley Field before creating a golem who pitches and hits his way to the World Series title. That golem’s name is Sandy Greenberg, and if you don’t understand where that comes from we are most certainly not going to help you.

Sherwin, incidentally, has no plans to head down to Waveland Ave. and cast an incantation on Wrigley’s ivy-strewn walls. His book is a fantasy * “but the Cubs winning the World Series, period, is a fantasy,” he noted.

And while the 86-year drought in Boston and the Cubs’ 99 years and counting are numbers often bandied about by the national media, local fans know all too well that the San Francisco Giants haven’t won it all since 1954. And Sherwin has an explanation for that, too (and it has nothing to do with Ortiz, Rodriguez and Worrell coughing it up in Game 6. Sorry for bringing that up).

No, the Giants are cursed because they took Willie Mays out of New York and put him in a windy, miserable hellhole called Candlestick Park * a move not unlike pulling the Venus de Milo out of the Louvre and propping it up in a Port-a-John.

And the Giants also stole Mays and the team from a young fan named Byron Sherwin. “After the Giants left New York, I really stopped being a fan,” he admitted.

Ed note: A version of this piece first appeared in J Magazine