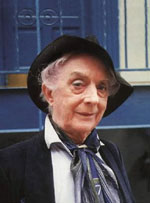 TEA ‘N CRISP: The patter is very English and very ‘Crisp’ Sundays at the SF Playhouse. Here’s an example: “Come to my party and bring your hum-drum friend with you.” Here’s another “You should never work. You should ask yourself – how can I get out of this?”

Richard Lewis James as Mr. Quentin Crisp – the notorious Gay Man who dared to stand-up to British Law regarding Homosexuals, was flamboyant, and when a young man worked as a prostitute (looking for love). His appearance – dyed long crimson hair, painted fingernails and painted toenails got some admiration from some – but of course attracted hostility and violence in the 30’s and 40’s.

The movie “The Naked Civil Servant” screened in the mid-seventies made him a Celebrity. Everyone wanted to hear his caustic wit. He put together a one-man show and toured it around the Country for years. He made an appearance before his death at age ninety-one at the Palace of Fine Arts in San Francisco for “Help Is On the Way.” He also performed his show at the Marines Memorial.

Keeping the spirit of Crisp, James has crafted a wonderful play and tribute.
In the second act Crisp (James) answers questions that came from cards that the audience filled out during the break. Mr. Crisp: What you do about an irritating neighbor? Crisp pauses, and says: “Shoot him.” A question about Marriage got this: “Marriage is for a little while – Alimony is forever.”

James has actually become Crisp. He has updated some of the wit to include modern day toys like Cell Phones. But, it all works wonderfully. It is really hard to believe that it is not really Quentin Crisp talking to you. And, James looks amazingly like him. If still alive – Crisp might have said of James – “Bad acting is for a little while. Good acting is forever.” He would have been pleased with Richard Louis James’s performance.

James proves himself a master, as he introduces a three-dimensional man who was much vilified, and in the end – much loved. It’s a nifty mixture of wit that will jolt you with its originality. A Hell of a good time – I loved it.

At The San Francisco Playhouse (Sutter Street). Every Sunday in Feb. 2pm. www.sfplayhouse.org

Steven Fales is the Mormon American Princess. This show is much more than just an autobiographical pastiche about a “Spoiled Mormon” – who fell out of grace with the Church because he ‘came out’ as a Gay Man. That’s right baby – this is Showtime, Broadway and HBO all rolled up into one great big evening of song and laughter.

Fales sings over fifteen Broadway shows – adding some special lyrics to many of the songs. He turns the tables on Broadway with his absolutely marvelous renditions on Broadway hits. From Minnie’s Boys he sings “Mamma, A Rainbow”. From Mama Mia and Stop the World…he belts out ‘Money! Money’ Money’ and ‘I Wanna Be Rich’ — both toe tapping zingers.

From the section of the show about New York he dazzled us with a sweet rendition of “I Don’t Know How To Love Him”. The song, of course from Jesus Christ Superstar was meant for Mary Magdalene to sing. Fales may be saying that there are similarities to him and her. Actually he IS saying that.

Also good was a song (music and lyrics by Fales) called ‘Narcissus’…that leads to “Making Love Alone’ and ‘If He walked into my life’. All good songs for the Narcissist.

In the segment “Mormon American Cowboy” Fales has fun with “Mamma, Don’t Let Your Babies Grow Up to be Escorts’ and ‘I Never Met a Man I didn’t like’ (Will Rogers Follies). And then, referring to his ouster from the Mormon Church – there is the “Excommunication Polka” – written by Fales.

The show works wonderfully on several levels. Fales has fun with the material. It’s basically an up show. The only time it bogs down a little is when Fales gets a little too serious when he talks about the Mormon years and his marriage, which he covered very well in “Confessions of a Mormon Boy” But that was strictly a play. I would like to see him keep it light throughout this robust show. Keep making light of the Mormon years. Leave the preaching to church. He is multi-talented and outrageous, and that is what works best in this fast paced Broadway style musical. Don’t all of a sudden hit us with Greta Garbo in a dying scene.

Fales is quick on comic timing. When talking about religion – “So many cults, so little time.” Instead of Latter Day Saint – it becomes “Latter Gay Saint”. From the musical Gypsy – “It’s Everything’s Coming up Mormon” instead of “Roses”. And this was a real hoot from ‘Evita” – ‘Don’t Cry for Me Salt Lake City’. The only thing missing was Peron. And with a nod to South of Market…he sez – “I’m Folsom, NOT Wholesome!”

“Mormon Princess” is exuberant and supremely entertaining. The evening is a wry examination of political truth.

There is something homey and comforting about Athol Fugard’s earthy and everyday language in his plays. And, although they may seem simple on the surface, beneath all the talk there are seething feelings boiling beneath. Daily life takes on many expected and unexpected turns, even when it is between brothers. The rift between the brother’s harbors underlying feelings of envy. Or, maybe because one is more polished and has a bit more education. Whatever it is – man like animals will always find something to quarrel about.

This is a story about two mixed-race brothers. Each has a different Father. Both have the same Mother. One is clearly more White and the other brother is clearly more dark. The two live together in a ramshackle home that looks like something you would find in a long closed freight train station. The façade is Corregated Steel that’s seen it day. In fact – it kinda resembles the new Federal Building in SF on a smaller scale.

Steven Anthony Jones and Jack Willis play two South African brothers that live together in a perfect tranquil relationship. But, that doesn’t last long. Trouble really begins when the darker skinned Zach starts to write to a white Woman who does not know that he is Black. Morrie sees that nothing but trouble can come from this pen-pal relationship and begs Zach to not write to the girl again. In that period of time and where they lived – it would not go well for the brothers. In fact – it would not be allowed. At one point Zach wants his White looking brother to pretend to be him. He even goes out and buys him a fine suit and nice straw hat so that he can look more like a Country Gentlemen. But all that this does is raise more issues of insecurity between both men.

There is some great incidental music in the play. I wished there could have been more of it. The Scenic design by Alexander V. Nichol is stunning. Kathy A. Perkins has designed the lighting that changes the mood perfectly. It is a Grand visual treat.

All in all – Fugard’s play is interesting word play. I would say that it is a play that needs top-quality acting and that is what you get from this A.C.T. production. The first act seems to me to be less interesting. The second act takes off like an old locomotive that finds new life. It gives us something to wonder and think about. After all, drama is all about desire – and that you get plenty of near the end of the play.

AT THE AMERICAN CONSERVATORY THEATER

Jose Rivera, the screenwriter for “The Motorcycle Dairies” (film) also is the writer of “Brain People” now being premiered at the Zeum Theatre under the Flag of A.C.T.

The story is about a wealthy woman, who once a year gets total strangers to come to her upper crust home for a dinner. She personally picks out the people to attend this bizarre affair. This year there will be a total of three; one of them of course is the host.

The play takes place in Los Angeles. From the dining room window you can hear sirens, noises and rioting on the streets. So, we assume that the time frame is during the Los Angeles riots. Lucia Brawley plays the extremely suave and beautiful host. She apparently has tons of money and offers up to $60,000 dollars if they stay for the evening dinner. The play is really quite creepy. Not only is the host a psycho case but also so are her two guests. They are all needy. What they don’t need is a dinner of ‘Tiger meat’ that has been killed for this occasion. What would really help them all is a shrink.

There are moments of danger also present in the play. Carving Knives are held in precarious positions and there are other nerve racking instances that produce ranting and raving between the women. They all have conflicting personalities. All of the women have lives that if not cohesive – they were to say the least, colorful. There wouldn’t be enough money for me to attend this dinner. No way would I want to sit around and listen to a bunch of crazy people on the verge of a breakdown with huge carving knifes on the table. At one point one of the women wants to leave. But, the amount of money was raised from $40,000 to $60,000. She’s needs money badly – so she stays. Myself, I would have snatched the $40 Grand and burned a hole in the carpet on the way out.

Mind games are played with the audience. It would make a very good scary movie. However, as queasy as the play made me feel – the performances by Rene Augesen, Sona Tatoyan and Lucia Brawley kept me mesmerized. It was not only exciting – it was like watching a fireworks show with no damage control. You’ll be biting your nails! Brilliant acting by everyone.

The show closes Feb. 16 at the Zeum Theatre at Moscone Square.