Queer Notes for the Progressive Convention 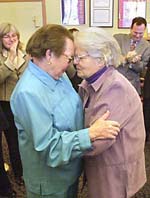 San Francisco Mayor Gavin Newsom is viewed as one of the most pro-gay mayors ever to hold office in the City, perhaps even in the country. His aptly dubbed “winter of love” gay-marriage fest at City Hall not only endeared him to the thousands who tied the knot, but also to queers throughout the city and nation who support extending the right to say “I do” to queer couples.

It was a brilliant move. His legacy within the LGBT community has been secured for all time. A negative word will probably never be written about Newsom in the mainstream queer press. The Bay Area Reporter, a gay weekly, came immediately to Newsom’s defense when the scandal hit the press about his affair with his best friend’s wife. Many queer organizations would also be hard-pressed to criticize the mayor in any way, shape or form.

Despite his record on gay marriage, Newsom is not a progressive. The fact that with the election only five months away, Newsom is still running without progressive opposition is troubling. The man has had a free ride for the past three years. The mainstream press uses kid gloves when criticizing him. His approval rating is extremely high, despite the affair and other so-called misdeeds.

Of course, blaming it all on demon alcohol was a stroke of genius. Especially when his descent into “alcoholism” was chronicled by the best PR team Newsom could have: Chronicle political columnists Matier and Ross. It may not be possible to beat Newsom.

Still, someone (or perhaps two people) from the left need to challenge him. If not for any other reason than to raise the issues that are still most important in this city: Lack of affordable housing, displacement of low-income people, escalation of murders and violence on the streets, disparity between the haves and the have-nots, etc.

The queer community is an important voting block. In 2003, LGBT folks in the Castro went for Matt Gonzalez, Newsom’s Green Party opponent. I’m not so sure where that vote will go this time around. A progressive candidate should not take the queer vote for granted. He or she should not assume it’s a guarantee, nor dismiss it entirely. A progressive candidate can appeal to queers not only from the leftist-leaning Harvey Milk LGBT Democratic Club, but also from the community at large, who see no improvement in the number of homeless on the streets, no increase in real affordable housing, no difference in how the poor and working-class are managing to make ends meet. Even the middle-class has to admit that the promises of a rosier future have not materialized after three years of “Team Newsom.”

As BeyondChron Managing Editor Paul Hogarth noted in a recent story, Newsom’s refusal to release millions in supplemental funds passed by the Board of Supervisors and slated for affordable housing and other services puts him at a disadvantage in a race against a progressive challenger(s).

Saturday’s Progressive Convention could be a jump start for a revival of the movement that took off with the 1999 Tom Ammiano write-in campaign and the return of district elections. A movement that was re-energized by Matt Gonzalez’s challenge to Newsom in 2003.

If a candidate comes forward at the convention, it’s up to progressives to make this election about more than the person(s) running. The race should be about a whole host of issues, including free MUNI, better alternatives to jails, affordable housing, an end to displacement and gentrification, and implementation of universal healthcare.

In other words, a real vision of a San Francisco we want to create.