Quality, Affordable Health Care For All – “Let’s Get it Done!” 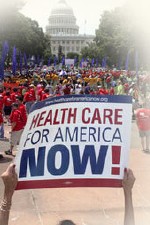 Right now, one in five Californians lives without any kind of health insurance. Proposals in front of Congress could reduce the number of uninsured by 97%, expanding coverage to 5.3 million people in the Golden State.

Today at 5:00 pm at San Francisco’s Civic Center, members of labor, Organizing for America, MoveOn, ACORN, Health Care for America Now and thousands of residents from across the Bay Area will gather to launch the final leg of a campaign to win comprehensive health care reform that is affordable and the highest quality for our families, our businesses, and our nation as a whole.

Under the umbrella of Health Care For America Now (HCAN), a grassroots coalition of more than 1,000 organizations in 46 states representing 30 million people dedicated to winning quality, affordable health care we all can count on in 2009, thousands of people are expected to attend rallies across California in the coming days.

Despite support from President Obama, Vice President Biden, and more than 190 Members of Congress, there are still Senators like Dianne Feinstein who have not signed onto the principles of Health Care for America Now. HCAN is calling on Senator Feinstein to stand up against the private insurance companies and be a champion of health care reform for our families.

Some of the principles HCAN has been fighting for in 2009 include: an inclusive and accessible health care system in which no one is left out, a choice of a private insurance plan, including keeping the insurance you have if you like it, or a public health insurance plan that guarantees affordable coverage and health care coverage with out-of-pocket costs that are based on a family’s ability to pay.

Critical to groups like ACORN, one of the country’s leading African American and Latino led organizations, is the demand for equity in health care access, treatment, research and resources for communities of color. ACORN is calling for the elimination of racial disparities in health outcomes and real improvement in health and life expectancy for all.

An African American woman is twice as likely to die from breast cancer as a white woman. Hispanics in America are seven times more likely to die from diabetes as non-Hispanic whites. To provide equal health care for all we need to invest in health care in all our communities. We need to be sure that we have doctors and other providers who understand the language and culture of all our communities and we need to collect good data and research on the best treatments for people of all races.

Health care reform is the biggest issue facing our country–and the fight to win it is heading into its toughest days. After a month of unrelenting attempts to disrupt and derail the process while Congress was in recess, the defenders of the status quo are preparing an all-out attack on this once-in-a-generation opportunity to build a health care system that works for all Americans.

The event at San Francisco City Hall at 5pm on Wednesday, September 2nd is one of our last chances to push Congress to do the right thing. Enough of the Teabaggers’ bizarre antics – Its time for our elected representatives to go back to Washington and “Get It Done!”
To Send an email to your elected representatives in Washington DC go to: http://salsa.wiredforchange.com/o/2749/t/4433/campaign.jsp?campaign_KEY=2915

For more information or go get involved in Health Care For America NOW’s campaign to win quality, affordable Health Care for All contact David Sharples of ACORN at (415) 377-9037 dsharples@acorn.org.