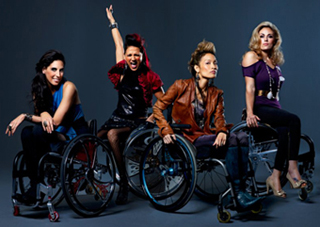 The history of disability depiction in the media is a terribly sorry one. There is real hope that this is about to change with the premier of Push Girls this week on The Sundance Channel, riding along in the lives of four vibrant women who happen to have spinal cord injuries and get around on wheels. The usual approach in film and television is to have a disabled person who is either angry (Mr. Potter in It’s a Wonderful Life), angry (Tom Cruise as Ron Kovic in Born On the Fourth of July), or angry (and tormented, as in The Hunchback of Notre Dame and Phantom of the Opera). Even in the recent and wonderful Hugo, directed by Martin Scorsese, Sascha Baron Cohen’s train station guard is the bad guy, wearing a leg brace thanks to a war wound. He is redeemed at the end as a nice guy, but make note: they gave the one angry character in the film a disability. The Push Girls aren’t going to be angry. They’re going to be feisty. A way different thing.

Disability depiction used to be absurd in the extreme. I once saw a movie from the forties with Ida Lupino (who I thought was quite pretty) who everyone felt so sorry for since she would never attract a husband with her disability—a limp that, for all my effort, I could not discern. Jimmy Cagny portrayed Lon Chaney in The Man of a Thousand Faces, and played the most outrageous scene of faith healing possible, dragging himself along the sidewalk, then untwisting his deformed hands and legs and shakily rising up at the heavenly encouragement of some false faith healer. Amazing stuff. (This movie, paradoxically, deserves praise as well, because Chaney grew up in a Deaf family, and the film, well mostly, does a good job of showing them as a loving family who happens to sign.)
One notable and very good exception in the “early era” is Marlon Brando’s authentic portrayal of a spinal cord injured war veteran in The Man. And he gets the girl.

There has been some forward progress in the last forty years or so, though spotty. Jon Voight definitely changed the lives of paraplegic men when he successfully pleasured Jane Fonda in Coming Home. Mask, starring Cher and Eric Stoltz as her facially-disfigured son is a fine film, showing his spirit and self-acceptance, though playing a bit into the heroic stereotype. And, of course, his disability ultimately kills him. (Sorry if I just spoiled the ending for you. See it anyway.) In 2003, CBS’s Joan of Arcadia included a son with a recent spinal cord injury, actor Jason Ritter and the show’s writers giving us a fair portrayal of someone in the process of just getting on with his life.

Then we take a small step back with Artie on Glee. Well enough that he’s an active wheelchair user who gets out there and fully participates, able to sing and perform. But we don’t get to learn much about how he really does what he does. He just happens to be using a wheelchair. And, of course, he’s the nerdy kid who doesn’t get the girl.

Why couldn’t they have made him the cool guy?

Now, at long last, we will get a real look at real chair users in real life. I’m not generally a fan of any reality show (OK, Dog the Bounty Hunter is an occasional guilty pleasure), and find the format mostly gratuitous and manipulated. But I’m very hopeful that with Push Girls, The Sundance Channel is going to give us something worthwhile in the pantheon of disability depiction.

I know what some of you fellow people with disabilities who know about the show are probably already saying. “Four fashionista women in L.A. are not exactly your typical chair users.” Granted. The reality of reality shows is that four University of Dayton engineering students in chairs are not going to draw much of an audience. I think we have to face reality and live with that.

But there’s an upside to it. We don’t get to see feisty, sexy, living to the hilt characters in chairs on television. This is truly a first, and being chair users, they will come up against the same array of universal issues that the rest of us wheelers encounter. And it’s easy to guess what they will be.

There will be no open blue parking spots, used by people walking two miles through a Home Depot. They will be in bathrooms, waiting for people using the wide stalls. People will be patronizing to them about how wonderful it is that they are out in the world at all. They will constantly field offers of help they don’t need, and people will be saying “I’m sorry,” having absolutely done nothing wrong. They will have very limited seating options at concerts, and not be able to sit with all their friends. They will be compromised by healthcare funders. They will get the occasional urinary tract infection, or even a pressure sore.

I love the notion that people will get a sense of the texture of what comes at us in our daily lives in a society that really doesn’t get what our lives are about.
But my far greater expectation is that they will mainly live their lives. Work, food, friends, fun, lovers, family, talents and interests, maybe even a political or philosophical view now and then (not to risk boring the audience with anything too “deep,” of course).

On the whole, my hope for Push Girls is that the same living of life that everyone else is doing is mainly what they’ll be doing, and to the degree their paralysis is even an issue, the audience will get that it’s far less an issue than people generally think.
Perhaps my greatest hope for the show is that their mastery of their disabilities is what will come across, mastery that allows us to mainly focus on the same things as everybody else.

I wheel you walk. I spend an extra thirty seconds to load my wheelchair into my car, and it’s normal for me. We just do what we gotta do, because the drive to live entirely overrides being frustrated by having to deal with things that we can’t change. It’s what people do. It’s what the Push Girls will do.

My hope is also that other people with disabilities will be invited into their world. There’s nothing like hearing a group of PWDs sitting around talking about how clueless the world is to the truth of our lives to really get that it’s not our problem, it’s everybody else’s. We have great sympathy, actually, for those poor people who get so nervous around us.

My litmus test for the success of Push Girls is how many fewer people use up blue parking spots they don’t really need, keep to the narrow bathroom stalls like they’re supposed to, and will stop apologizing to me just because they see me after the elevator door opens. May it be so!

Gary Karp is an internationally recognized keynote speaker, author, and trainer. In 2007 he was inducted into the Spinal Cord Injury Hall of Fame as a disability educator. www.moderndisability.com