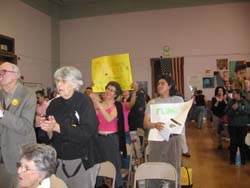 “Public education is the only way 65 to 80 percent of children of color will be able to go on to college and higher education,” said Cleveland Elementary Advisor “Brotha” Clint. “We are the richest country on the planet with citizens in the Bay Area that are so rich, they personally could bail out our children and teachers.”

Clint, also a para-professional representative for the school, said absolutely no reason exists for the current deficits in public education budgets, and he condemned state spending on prisons. In the nation, California ranks first in prison spending and forty-seventh in education spending, he added.

As a result, Clint called on Senator Carole Migden’s representative, Supervisors Bevan Dufty and Gerardo Sandoval, City Controller Ben Rosenfield and a handful of school board officials to release all funds from the rainy day account.

The Governor’s budget cuts and President Bush’s “No Child Left Behind Act” are failing the public school system, Clint said. “Pretty soon, children are going to think NCLB stands for ‘No Child Left Believing That Anyone Cares.’”

With the Governor expected to slash state spending on schools by 10 percent this summer, San Francisco Unified School District officials are scrambling to cope with the district’s estimated $40 million deficit.

On March 15, the district notified 535 teachers of potential layoffs, which are scheduled to start on May 15. In addition, school district officials turned to the city, hoping to secure $30 million—enough to keep teachers’ jobs from the cutting block.

School officials’ hopes for local assistance are rooted in the city’s Rainy Day Fund, a school system emergency reserve account that was created by Supervisor Tom Ammiano and approved by voters in 2003.

The fund currently has a $122 million balance available, and last week Mayor Gavin Newsom announced the district qualified for an approximate $19 million, depending on the final outcome of the state budget in July.

When concerned parents asked Rosenfield at the meeting why the school district wouldn’t be getting the full $30 million, Rosenfield explained the terms and conditions set forth by voters in the Rainy Day Charter.

He said two conditions must exist for the city to release funds: a significant number of teacher layoffs must occur, and the school district must be receiving less from the state per student after inflation adjustments occur.

Since the school district already meets both criteria, Rosenfield said the next question the city asks is, “how much can we legally draw from this account?” The answer depends on a mathematical accounting formula, he said, and he passed out flyers to parents explaining the equation.

“SFOP is having a big impact on this issue,” Supervisor Dufty said. “[And] you have my full support … my commitment that we will continue to back stop other [job] cuts at this point … I don’t want to take the Governor off the hook. I pledge to stay on the good side of the teachers.”

Dufty and Myong Leigh, a deputy superintendent for the school district, said officials would make every attempt to rescind as many layoffs as possible, as new budget and job opening information becomes available.

“This situation is unprecedented,” Leigh said. “It is something that has our full attention.”