Public Option Only Way Out of Health Care Mess 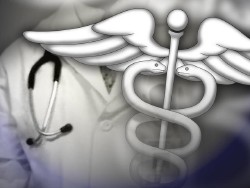 There’s a way for Democrats to salvage the health care mess, but it doesn’t look like they plan on using it. President Obama unveiled his “compromise” bill yesterday to kick off a “bi-partisan summit” at the Blair House, but the issue has dragged on for so many months that the public isn’t following these nuances anymore. Only if the bill gets changed in a substantial enough way to grab voters’ attention will we see a shake-up in momentum. Democrats have realized that reconciliation is the only way they’re going to pass a bill, but the public doesn’t care enough about “process” for that to matter. Only reviving the public option, which polls continue to show is popular despite being attacked as a leftist plot, will be enough to convince us that months of health care debate hell was worth the trouble. But right now, it doesn’t look like Democrats want it badly enough to be part of the final bill – which leaves the grassroots to demand that it be put back in.

“It’s official,” proclaimed Jon Walker on the blog Firedoglake yesterday. “Obama is against the public option. How do we know this? Because Obama, for the first time ever, released his own official health care reform proposal – and it does not contain a public option. You can’t claim to support an idea if you are unwilling to make it part of your own proposal.” With the proposal a starting point to negotiate with Republicans who want him to fail, don’t expect Obama to push the public option.

Which is insane, considering how terrified Democrats are about November. Polling in key states where hot Senate seats are in play (Illinois, Colorado and Harry Reid’s own Nevada) shows the public option is still popular, and putting it back in the health care bill would improve things. Only 34% of Nevadans liked the Senate bill that passed in December, but 56% like the public option. The gap grows to 31 points in Illinois and 37 points in Minnesota, so why not use it?

Right now, Obama and the Democrats “own” the health care bill. And Republicans will never vote for it in any form, so they’ll own it when it passes. And no public option is the kiss of death for the mid-terms. After the Massachusetts special election, Martha Coakley’s campaign admitted their numbers started going down on Christmas – right after the Senate passed a bill requiring us to buy private insurance without a public option. Caving to Joe Lieberman and Ben Nelson’s extortion has truly become the day the Democrats died, and they’ll have no one to blame but themselves if they lose in November.

But wouldn’t placing the public option back in the bill be viewed as a sign of “bad faith” and “partisanship” – and make the Republicans look like victims? It’s not like that approach has been working. For the past two years, Democrats have assumed that if they look like they’re trying to reach out and be bipartisan – while the Republicans play obstruction – those swing voters who decide every election will rally to their side. The public hates “partisanship,” so won’t they support the party that looks reasonable?

Think again. Comparing polling data from Election Day 2008 and today shows that Democrats have lost 12 points in public esteem, while the G.O.P. has gained three points. But that doesn’t measure the likelihood of who votes – everyone knows the Democratic base is depressed, while Republicans are energized. With some polls showing a 40-point enthusiasm gap for November, they will get killed.

“The problem isn’t that Democrats haven’t done enough to reach out to Republicans, or to get out the message about Republican obstruction,” said blogger Chris Bowers, who cobbled together that polling data. “The problem is that the public doesn’t care about political process, which makes attempts to publicly reach out to Republicans useless political theater that does nothing except delay important legislation. The public wants their lives to improve, and doesn’t care about process stories or the 24-hour news cycle.”

And yet, Obama deludes himself into believing that a well orchestrated “bi-partisan” media event will help voters understand that Republicans are being unreasonable. But the public cares more about results than process. The Tea Party crowd is emboldened that nothing has changed, liberals are upset and angry that nothing has changed, and independents have concluded that Democrats are incompetent and cannot govern.

With the President clueless, activists are stepping up to the plate. After Colorado Senator Michael Bennett sent a letter to Harry Reid demanding to put a public option back in the health care bill and pass it through reconciliation, the netroots mobilized support online. You can go to www.whipcongress.com, and tell your Senator to sign onto the Bennett letter. As of yesterday, 22 Democrats are on record in support – including California’s Barbara Boxer and Dianne Feinstein. It’s also no accident that Bennet got the ball rolling – he’s one of the Senators up for re-election.

It’s important to support the public option work our friends at Democracy for America, CREDO Mobile and the Progressive Campaign Change Committee are doing – because it’s the only thing hopeful to come out of Washington in months. But with how much the Obama White House and Democratic leadership have fumbled health care this year, it’s been hard for me to remain hopeful. And at the end of the day, the netroots can’t do it alone – they will need progressive groups like organized labor that politicians respect.

Sadly, SEIU President Andy Stern sent out a press release yesterday giving Obama cover for his latest bipartisan charade. “With the President’s leadership and thoughtful consideration that the only way forward is with comprehensive reform,” said Stern, “there is a guarantee that reform can and will be meaningful.” Such rhetoric isn’t helpful, while others are out doing the heavy lifting to get us out of this mess. Bringing back the public option can save the Democrats’ hide in November – we need all hands on deck.