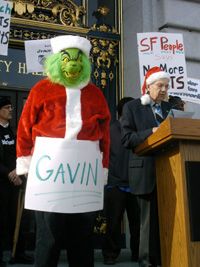 A raucous group of activists rallied at City Hall yesterday, protesting Mayor Gavin Newsom’s proposal to cut $97 million in city services that will primarily affect seniors, poor and working people, and the chronically ill days after the holidays. Beginning on the front steps and ending up at the Mayor’s office, protestors attacked Newsom for being unwilling to increase revenue and demanded downtown interests play a greater role in ending the City’s current budget crisis.

Newsom, likely unwilling to face the protestors and hoping to draw attention away from them, called a press conference on Proposition 63 beginning at the same time as the budget protest. Newsom played almost no role in the passage of Prop. 63.

Protestors attempted to crash the conference, but security guards prevented them from entering. Instead, the protestors stood outside singing revised Christmas songs targeting Newsom as the “Grinch of Christmas,” as the cuts are slated to go into effect just after the holidays.

The protest began with a rally led by series of speakers, many who work directly with those most affected by the cuts. Social workers decried the severe consequences of the loss of medication, counseling and support services for the City’s indigent the cuts would cause.

“These cuts are going to kill people,” said Michael Lyon of the Gray Panthers and Senior Action Network.

Supervisor-elect Ross Mirkarimi also spoke, delivering a rousing speech which he said he hoped would dispel any doubts about where he stood on the cuts.

“I am absolutely opposed to any cuts whatsoever that impinges on our most vulnerable citizens,” said Mirkarimi. “We should never compromise ourselves in making sure those that are most vulnerable don’t suffer first.”

In addition, Mirkarimi asked the Board to think more innovatively about securing revenue, suggesting possibilities such as PG&E shouldering a greater tax burden and a restructuring of the Redevelopment Agency.

Marlena Sonn, an organizer for the new organization, says that while they want SF People to advocate for a variety of causes, she believes much of their attention will focus on the budget.

“One of the most major issues is how to preserve services in the face of a really painful budget cycle over the next two years,” said Sonn.

Supervisor Chris Daly, who also helped organize and attended the event, lambasting the cuts and Newsom’s responsibility for them.

“Newsom has portrayed himself as a maverick on social stuff,” said Daly. “But when it comes to bread and butter issues, Newsom is passing his budget on the backs of the poor. There’s no new formula there.”