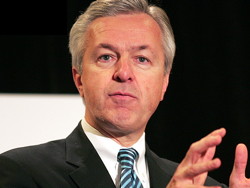 In the midst of a pitched battle between major banking interests and grassroots activists over wrongful home foreclosures and predatory home loan practices, Occupy Bernal protesters, Occupy SF protesters, local community organizers, and area homeowners staged a major demonstration on Saturday outside the condominium of Wells Fargo CEO John Stumpf, culminating in a mock auction of the home and a condemnation of local, state, and national politicians.

The action was the latest in a recent wave of protests against major banks in San Francisco triggered by San Francisco Assessor-Recorder Phil Ting’s recently released report showing that 84% of foreclosures in the city had seriously violated the law, including felony crimes. The report has reinvigorated the movement, and activists have begun working closely with San Francisco policymakers to demand strict enforcement of the applicable laws. Activists from Occupy Bernal have demanded that Stumpf meet with local foreclosure victims to come to a resolution of the conflict, but have received no response to numerous voicemail messages.

The Occupy demonstrators and activists from the Alliance of Californians for Community Empowerment have called on the City of San Francisco to impose a total moratorium on home auctions until a full investigation into the offenses of major banks has been conducted. But Wells Fargo has been targeted heavily in recent weeks as perhaps the worst — and least responsive — offender in the foreclosure crisis. Activists have demanded that the bank provide affordable loan modifications and principal reductions to homeowners currently battling foreclosure.

The demonstration outside Stumpf’s home did not draw the CEO himself out into a dialogue, but five security guards and several police officers were on hand. The event culminated in the delivery of a “foreclosure notice” to the building, although the security personnel prevented demonstrators from accessing the inside. The notice detailed San Franciscans’ grievances with Wells Fargo practices and the various organizations’ demands regarding loan modification.

During the reading of the notice, a resident of the building — rumored to be a Stumpf family member, although this was not confirmed — emerged in the front entrance and yelled at the protesters, “If you’d go out and get jobs, you’d have enough money to pay for your homes!” One demonstrator fired back, “We don’t want money! We want justice!” The crowd erupted in applause and the resident retreated back into the building.

Local clergy and homeowners were among those who spoke to the assembled crowd via megaphone. Many in attendance were currently fighting Wells Fargo and other banks for control of their homes. Some had been evicted. One homeowner, who identified herself as Elissa, was visibly emotional as she slammed Stumpf: “His people are taking away my house and he can’t even come out here and talk about it. He won’t even talk to us,” she said.

Protesters followed up the foreclosure notice with a mock auction, frequently punctuated by fistfuls of fake dollar bills hurled into the air like confetti. The auction was not limited to Stumpf’s home, however; the atmosphere quickly turned hostile toward local, state, and national politicians, with the loyalty of San Francisco Mayor Ed Lee, California Governor Jerry Brown, and United States President Barack Obama, among others, auctioned off as well. When a protester demanded that all three be thrown in jail, the crowd applauded the call.

One key figure in the recent foreclosure debates that was not present was Monica Kenney, the homeowner who recently received a stay of execution on her impending home sale. In yet another bit of good news, Kenney has recently found part-time employment, and was unable to be present due to her work schedule.

ACCE activist Erin Franey, however, provided an update on the case: after promising to find a solution that would rescind the planned sale of Kenney’s home, Wells Fargo and Fannie Mae have been completely silent since Wednesday. Kenney and her allies at ACCE have turned to District 11 Supervisor John Avalos and other local policymakers for assistance.

Avalos in particular has been responsive to requests for aid, and appears to be taking up Kenney’s cause as a personal and political crusade, according to Franey.