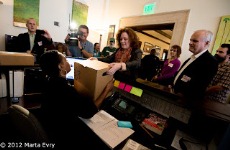 In a sign that progressive push-back against Los Angeles Mayor Villariagosa’s membership in the right-wing “Fix The Debt” lobbying group isn’t abating, activists from MoveOn.org and the Progressive Change Campaign Committee delivered over 21,000 signatures to LA City Hall this week demanding Villariagosa resign from the group’s steering committee. “They call themselves bipartisan because they’re able to buy members of both parties,” said Richard Eskow, a blogger for the Campaign for America’s Future.”The primary agenda for these folks is to lower taxes for millionaires, billionaires and corporations,” he said.

In a scathing Huffington Post article about the Campaign To Fix the Debt’s agenda, Eskow was even more blunt, “Let’s be clear: This crowd doesn’t really care about deficits. It never has. It’s an anti-tax group which pursues its goals by fighting to downsize government programs and “reform” the Internal Revenue code. Its natural allies are the Republican Party, the nation’s mega-corporations, and billionaires.”

Besides MoveOn.org and the PCCC, the Calfornia-based Courage Campaign has also called on Villaraigosa to resign from the group.

“The so-called ‘Campaign to Fix the Debt’ is nothing more than a front group to protect tax cuts for the wealthy while balancing the budget on the backs of the poor and elderly,” said founder Rick Jacobs. “The fact that Mayor Villaragosa, or any other Democrat that claims to want to protect Medicare, Social Security and Medicaid, would join this effort is nothing short of shameful….Mayor Villaragosa should resign immediately.”

Last week, Villaraigosa defended his decision to join fix the debt. “I am a Democrat and a progressive, but you know what? The country is evenly divided. They won too,” Villaraigosa told CNN, referring to Republican lawmakers.

Angela Garcia Combs, a native Angeleno and former volunteer for the Mayor who started the petition, said she decided to deliver the signatures today after staff from Villaraigosa’s office told her it would take at least three months to schedule an appointment.

She promised today’s action wouldn’t be the end of it. “Any Politician that calls themselves a Democrat, Progressive, Centrist,Bipartisan, we are putting you on notice too. We are coming after you if you join this group,” said Combs.

On Facebook, Villaraigosa again defended his membership in Fix the Debt, attempting to clarify his position on so-called ‘entitlement reform’.

“Let me be very clear: I oppose the privatization of Social Security. I oppose turning Medicare into voucher care,” said Villaraigosa. “I oppose dismantling Medicaid. I support letting the Bush tax cuts expire for the top 2%.”

However, a spokesman for the Mayor’s office told KPCC Villaraigosa was open to raising the retirement age for Social Security and other federal benefits.

This piece first appeared in calitics.com