Proposition A: A Safety Net for All 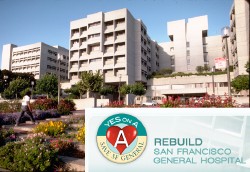 Few issues raise as much personal anxiety and contentious debate as health care, how to pay for it and how to deliver it. Mandatory employer-paid insurance, single-payer coverage, individual health savings accounts—all have their interests groups and passionate advocates. But even the best health insurance plan in the world is meaningless if there are no facilities that can provide the needed care.

That is what makes San Francisco General Hospital, the heart of the city’s health care system, so important. It is the only Trauma Center in the city, the place people with life-threatening injuries are taken. The next closest trauma centers are in Palo Alto and Davis.

SFGH also serves the vast majority of city residents who rely on public insurance and those without insurance. Other private hospitals aren’t able to do that. It is the hospital hub of the city’s new universal health care initiative. It has been on the cutting edge of HIV/AIDS care since the outbreak of the disease in the early 1980s. And it is the only hospital in the city equipped to handle a high number of patients in the event of a major natural disaster like an earthquake.

But currently SFGH does not meet the state seismic standards for acute hospital buildings to insure that it can withstand an earthquake and continue providing health services to the many San Franciscans who would then need them. If we don’t rebuild it, state law mandates closing it by 2013, including its acute care facilities and emergency room.

Proposition A, an $887.4 million bond, will save SFGH by providing the funds to rebuild it to meet those standards. Prop A would do so without increasing the city’s debt load or property tax burden because payment on other bond debts will end this year.

SFGH is truly a safety net for all San Franciscans. A thin line divides well-being and mortality. Illness and injury often take us by surprise—they aren’t usually on our “to do” list. A traffic accident, a natural disaster or a sudden disease could put at risk the life of a resident of the Mission District as likely as a one from Pacific Heights.

So unlike the health coverage debate, SFGH and Prop A enjoy nearly unanimous support across the city’s diverse political spectrum. Prop A is backed by Mayor Gavin Newsom and the entire Board of Supervisors, the city’s labor movement and the San Francisco Chamber of Commerce, the local Democratic and Republican Parties. Even the other hospitals in the city back Prop A because they know their facilities and emergency rooms would be overwhelmed if SFGH were no longer there.

This unanimity is a good thing because Prop A requires two-thirds approval to pass. So even though there is no organized opposition to Prop A at this point, we cannot afford complacency. We must turn the political consensus into a super majority vote.

Right now the city that knows how needs to show what San Francisco values really mean—an expanded sense of self-interest where caring for your neighbor is taking care of yourself too.

For you, for me, for this city we call home, vote for the “Heart of San Francisco,” vote for San Francisco General Hospital, vote “YES” on Prop A!

Damita Davis-Howard is the President of SEIU Local 1021, which represents workers at San Francisco General Hospital.