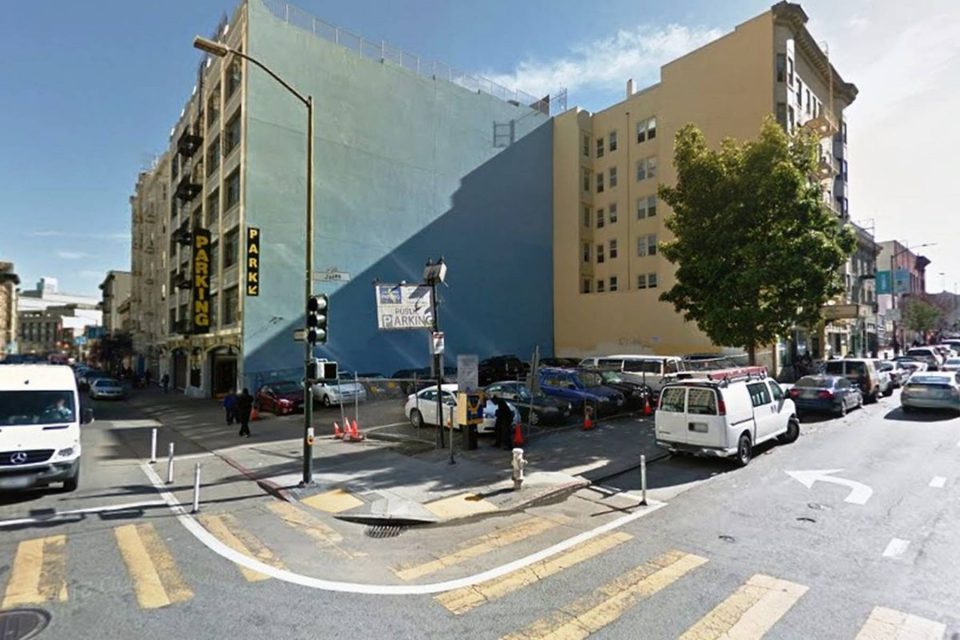 180 Jones, free of drug dealers when SF bought the site

The city plans to turn 180 Jones into a 24-hour sobering center for meth — across the street from the Boys & Girls Club and affordable family housing. Can you imagine the city placing such a facility at such a kid-centered area in any other neighborhood?  —-Randy Shaw, “After 40 years, the Tenderloin at another crossroads,” SF Chronicle, Feb.23, 2020

I described in Sunday’s SF Chronicle how San Francisco city policies threaten to reverse the Tenderloin’s progress. Nowhere are the city’s misguided and destructive plans clearer than in its moving to open a meth center at 180 Jones.

That site is directly across the street from an affordable family housing project at 201 Turk and the offices of the Tenderloin Boys & Girls Club. Such a project would never be considered in a kid-centered part of another city neighborhood.

The city’s role in preparing the site for a Meth Center is best understood from Naomi Klein’s classic book,  The Shock Doctrine. It describes how neoliberal economics created financial crises, which were then used to justify austerity policies. We have a similar situation at 180 Jones.

For decades that site was a privately owned parking lot with no drug dealers (see photo above from 2017 just after the city bought the site). That changed after the city bought the site. The city, as with other neighborhood properties I discuss in the Chronicle,  allowed its property to degenerate into a drug dealer haven. City Attorney Dennis Herrera often sues landlords allowing drug activities on their property but that would have required San Francisco to sue itself.

The city now claims that its negative transformation of the site justifies a meth center. It says it will make the corner safer.

I kid you not. It’s the shock doctrine applied to San Francisco’s most ethnically diverse, kid-centered, non-gentrified neighborhood.

In gentrified neighborhoods like Noe Valley, the city buys sites so they can be transformed into a Town Square filled with positive activities. In the Tenderloin, the city allows its land to degenerate so it can justify placement of a meth center that will bring meth users from across the city into the Tenderloin.

We need four supervisors to put a measure on the November ballot to stop this.

A Costly, Temporary Use

The city purchased 180 Jones in 2017 after an agreement reached between the Central City SRO Collaborative (CCSROC) and Joy Ou of Group I, the developer of a hotel and condo project at 950-974 Market Street. The CCSROC (a program of the Tenderloin Housing Clinic, which publishes Beyond Chron) and Group I agreed to shift the developer’s funding for on-site inclusionary housing to buying 180 Jones for use as “step up” housing. Step-up housing moves formerly homeless tenants into either SROs with private baths or apartments, freeing up their rooms for homeless people leaving Navigation Centers. CCSROC tenants could not afford the “affordable” units in the new development but could move into the step-up housing built at 180 Jones.

Tenderloin residents saw the shift to step-up housing in a 100% affordable project at 180 Jones as a huge victory (See “Tenderloin Wins Historic Jobs, Housing Victory,” October 27, 2016).  It was a tribute to Joy Ou’s commitment to the needs of Tenderloin residents that she purchased 180 Jones for the community. The site had caused no problems before and so nobody imagined that it would become a center for drug activity under city ownership. And that the city would then use their failed maintenance to justify bringing in a Meth Center.

TNDC won the RFP to build on 180 Jones. Construction is scheduled to commence in fall 2021. So the city wants to spend $6.8 million on a one-year facility that they will immediately have to replace.

That makes no sense. We need the Board of Supervisors to hold a hearing on this plan before it goes a step further. The city needs to find a permanent facility in a far more appropriate location. The city must also accompany that search with the neighborhood outreach that it bypassed at 180 Jones.

“That’s Where the People Are”

Some believe that the Meth Center should go to 180 Jones because that’s where the people needing the service allegedly are. Here’s the truth. This would be a citywide facility bringing meth addicts to the Tenderloin from all neighborhoods. And after they are done with getting services there is no plan to return them to the neighborhoods where they came from.

In other words, this is a strategy to remove meth addicts from other neighborhoods and place them in the Tenderloin. It fits the Tenderloin’s historic role as a containment zone. A role former Mayor Lee vowed to end.

When two decades ago the San Francisco Fire Department left its headquarters on the 200 block of Golden Gate, it opened up desperately needed office space for the Tenderloin. But Mayor Willie Brown wanted the space converted to a homeless shelter for families. That it was  not built for that purpose and the families to be sheltered were not from the Tenderloin made no difference;  City Hall spent a fortune converting the offices to shelters and Brown threatened to cut the funding from Tenderloin groups opposing the plan.

When it comes to the Tenderloin the city takes a heads I win, tails you lose approach. If it helps their case to argue that the client base is already there, that’s what it argues. If the client base isn’t there, they proceed anyway.

The Tenderloin already has a Methodone Clinic on the 400 block of Turk. But the city wouldn’t care if there were a Methodone or Meth Center on every block of the Tenderloin—it was so confident about its plans that it moved forward at 180 Jones without speaking to anyone in the community. The Health Department has done the same thing with plans for a “Mobile Crisis Center” on the 500 block of Eddy Street. The announcement was posted on the street without the city having talked to property owners on that block (or anyone else).

What does it say about San Francisco that it treats a low-income, ethnically diverse neighborhood with such contempt?

Enough is enough. Tell City Hall to find a permanent site for the Meth Center in a more appropriate location. The Tenderloin deserves better.