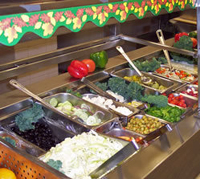 On December 1, the committee that allocates general fund money to the schools via Prop H will consider whether to fund two proposals that address students’ food security. One plan would fund a “point of sale” swipe card program that has already proven to increase the number of kids eating breakfast. Dana Woldow has written a number of School Beat columns on the importance of children not starting school hungry, and studies show that increased school breakfast participation correlates with less tardiness and absence, higher math grades, and reductions in problems like depression, anxiety and hyperactivity. The other proposal would expand the district’s salad bar project to 12 additional schools beyond the 25 that began such projects this year. In light of the many low-income children in San Francisco schools, and the inadequacy of government programs to ensure their basic nutritional needs, using Prop H funds to address students food security is a sound investment in our future.

When voters passed Prop H in March 2004, they envisioned funding a comprehensive approach to improving San Francisco schools. That’s why two proposals to address students’ nutritional needs is so encouraging, as it reflects a recognition of the link between a hungry stomach and poor academic performance.

The first proposal deals with a fact that anyone who has raised teenagers well knows: they are not going to sit down in a cafeteria and eat breakfast before going to class. That’s why Balboa High started a “Grab n Go” program where students can grab their breakfast as they come in the front door and go right to class. Students use their student ID as a “swipe card” (much like an ATM card) to denote their eligibility for free or reduced price meals; those who do not qualify for reimbursable meals can pay cash.

The Balboa program quickly tripled the number of students eating breakfast. But in order for students getting the free or discounted breakfasts not to be publicly highlighted, a point of sale (POS) swipe card system needs to be implemented for all students to use.

The last thing we need in San Francisco is for students to go hungry because they are too proud to have to announce to their classmates that they are entitled to a free or discounted meal. The Prop H Committee can vote to fund this point of sale system at its December 1 meeting, and it deserves support.

The other proposal would expand the district’s successful salad bar program. Beyond Chron has previously contrasted Berkeley’s successful program with San Francisco’s lack of such a program in all of its schools, and given inadequate food stamp allocations one would think that the Prop H committee would jump at the chance to get young people eating healthy, organic produce.

Any serious student of public education knows that for all of the focus on school conditions, teachers, class size, and the quality of textbooks, factors extrinsic to the classroom—such as safe and stable housing and good nutrition—play a major role in student achievement. One reason Prop H drew such broad support was that it gave San Francisco the ability to address these more holistic educational issues that were not addressed by state funding.

Let’s hope the Prop H committee recognizes the educational role of students food security when it votes on its allocations this Saturday.