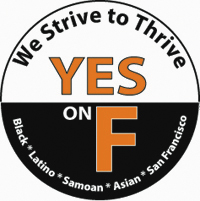 To set the record straight, F is for Fairness has invited Lennar Consultant and former 49ers President Carmen Policy to a debate tomorrow (May 31st) at 6:30 p.m., located at 5030 3rd Street (at Quesada Avenue). Policy is invited to debate Alicia Schwartz of People Organized to Win Employment Right (POWER) on the future of Bayview/Hunters Point, being decided at the ballot on June 3.

Miami-based Lennar Corp. has bankrolled the most expensive initiative campaign in San Francisco history. Without campaign contribution limits, Lennar has spent over $3.3 million on Proposition G, and against the community-initiated Proposition F, according to Lennar’s recent financial disclosure, quietly released on May 22. Among these contributions are $40,915 to Carmen Policy, $343,138 for attorneys’ fees, $1.3 million on advertising, and $767,607 on “consulting services.”

Michael Cohen of the Mayor’s office recently admitted that Lennar’s campaign has little to do with serving the Bayview/Hunters Point community. “The only legal reason we are going to the voters is Monster Park,” Cohen observed. This explains Proposition G’s promised “parks” which would include acres of Astroturf parking lots for the 49ers.

“We think it’s time that Lennar stopped hiding behind its glossy fliers and television ads and faced the community,” stated Schwartz. “Politics can be a contact sport, but it should also be a contest of ideals. The community deserves to know the truth behind Lennar’s advertising blitz.”

F is for Fairness has promised to publicize this debate through its extensive network of volunteers and supporters, and invites Lennar to publicize the event by continuing to use its monumental financial resources. Carmen Policy could not be reached for comment.