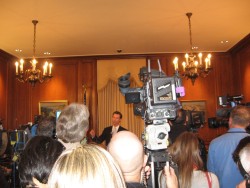 Mayor Gavin Newsom and his gubernatorial ambitions lost big—not because the voters approved Proposition 8, but because his campaigning proved (once again) his incapability of directly engaging those he disagrees with. San Franciscans have long known that Newsom is thin-skinned, as he doesn’t meet with the Board of Supervisors – even after voters formally asked him to. Newsom’s press conference on November 5th at City Hall again showed how defensive he is to criticism, as the Mayor dismissed the local election results – including the embarrassing defeat of his Community Justice Center. Prop 8’s passage is a setback to advancing marriage equality, and it’s time to hold the movement’s leaders accountable. It also exposed a perverse flaw in our initiative process: how can a simple majority vote to change the Constitution, while most tax increases and bond measures in California require a two-thirds vote? And while the SF Chronicle made a big deal of how 25% of San Franciscans voted for Prop 8, that’s about how many voted for Proposition 98 on the June ballot—which got killed statewide.

I don’t buy the conventional wisdom that Gavin Newsom “gloating” about the state Supreme Court decision cost the defeat of marriage equality. The Mayor had every right to celebrate that joyous occasion—and as he told a City Hall press conference, he has “no regrets” about standing up for a civil rights issue. And you have to admire how he didn’t let reporters goad him about how Prop 8’s passage hurt his gubernatorial ambitions.

But it did … and not because California voted to put discrimination in the Constitution, nor because the Prop 8 campaign used him as their poster child. Newsom allowed the opposition to scare him into believing he was a pariah, and he kept his campaigning against the measure on college campuses and liberal precincts. Unlike Mark Leno, who regularly goes on right-wing talk radio to promote gay rights, Newsom isn’t comfortable stepping out of his bubble – which is not a good sign if he wants to run for Governor.

Newsom hasn’t lost the LGBT community. They still love him, and will strongly support his gubernatorial campaign. But their liberal allies—like organized labor—will look for another candidate, because Newsom proved his weaknesses at assembling a “winning” coalition. I rarely agree with Phil Bronstein of the SF Chronicle, but his scathing analysis was fairly accurate. Newsom is so insecure that he can only campaign in front of favorable crowds.

In 1978, Supervisor Harvey Milk made himself the public face on television to defeat the Briggs Initiative – that would’ve banned LGBT teachers – and we won a huge victory. Was an openly gay politician thirty years ago any more of a “liability” for a statewide campaign than a San Francisco Mayor with gubernatorial ambitions?

We’ve known for years that Newsom is thin-skinned – and it affects where he chooses to campaign. In 2006, San Franciscans passed an advisory measure that he engage in policy discussion with the Supervisors – which he simply refused to do. When I asked him about it, he lied to me about meeting with the Board President “once a week.” In 2007, when Question Time was a mandatory ballot measure, he prioritized its defeat while ignoring other propositions like Muni Reform.

At Wednesday’s press conference, Newsom was particularly defensive when asked about local election results. The Mayor devoted substantial resources to promoting moderate candidates for Supervisor in Districts 1, 3, and 11 – but it looks like all three of them lost. Newsom deflected that question by heralding the re-election victories of his allies on the Board – Carmen Chu and Sean Elsbernd – although their races were never in question.

Of the three measures where Newsom was the main sponsor, two of them – Propositions L and P – were soundly defeated.

Prop L (the Community Justice Center)’s defeat was a real shock, and the Mayor has no one to blame but himself for failing to run a campaign. I had written before that Supervisor Chris Daly’s threat to “defund the CJC” (the Mayor’s reason for keeping Prop L on the ballot) had no real teeth. But now that the voters have spoken, Newsom’s archrival has a powerful argument for getting his colleagues to kill it.

Next Steps After Proposition 8:

Progressives are still mourning the passage of Prop 8—which was completely avoidable if the campaign had been far less reactive. City Attorney Dennis Herrera is suing to invalidate Prop 8, and the ACLU has filed a complaint – but like all legal matters, we won’t get results for a long while. Another route is to repeal the federal Defense of Marriage Act, which bars same-sex couples from Social Security, joint tax filings or immigration rights—even if they live in a state with marriage or civil unions.

Repealing DOMA requires an act of Congress, followed by the President’s signature. As a presidential candidate, Barack Obama supported a complete repeal of DOMA – which made him a far better candidate for the LGBT community than Hillary Clinton. It’s a no-brainer to go full-speed ahead on repealing DOMA, but there’s no question that Prop 8’s passage will make it far more politically difficult. And even if successful, it still won’t bring back marriage equality in California.

Unless a lawsuit prevails, our sole remedy is to run a statewide initiative campaign to repeal Prop 8 – which is daunting, exhausting and altogether depressing after what we just went through.

But if we must, there’s a clear lesson: we cannot allow the people who ran “No on 8” to the ground repeat the same mistakes, and that means asking tough questions. Rick Jacobs of the Courage Campaign also adds that the queer community could learn a lot from the Obama phenomenon: don’t be afraid to be yourself, and don’t defer to the self-appointed leaders who have failed us time and again.

The Need for Initiative Reform:

In the past two days, many have pointed the absurdity that a simple majority of California voters can vote to change the state Constitution – effectively taking rights away from a small minority. Amending the United States Constitution requires a two-thirds vote of the U.S. Senate, which then must be ratified by three-fourths of all state legislatures. At his press conference, Mayor Newsom stated: “protections in the Constitution have always been there to respect the rights of the minority – versus popular opinion.” All major civil rights laws and court decisions would likely have been repealed if voters had their say.

But in California, you can change the Constitution by a simple majority vote. The only bulwark from a “tyranny of the majority” is that the number of signatures required to put a constitutional amendment on the ballot is higher than what you need for a statute.

In California, it costs millions of dollars to run a signature-gathering campaign to put something on the ballot. So we now have a cottage industry of “signature gathering firms” who get paid by wealthy interests to collect enough signatures to put something on the ballot. For example, when Texas billionaire T. Boone Pickens wanted a proposition to benefit his gas companies, he paid a “signature gathering firm” to put Prop 10 on the ballot. Voters wisely rejected Prop 10, but we’re not always that lucky.

Meanwhile, state and local governments are strapped for cash because they cannot raise revenue or issue bonds without putting a proposition on the ballot. In most cases, these measures require a two-thirds supermajority. I don’t support abolishing initiatives, nor is it necessarily a bad thing to have voters change the Constitution. But we should require all state constitutional amendments to get at least a two-thirds majority by the voters.

San Franciscans are Not Conservative:

Once again, the Chronicle proved how clueless it is about the city’s electorate—as Heather Knight reported that San Francisco “defied its far-left reputation.” Evidence? One-in-four voters “surprisingly” voted to ban same-sex marriage.

Is that because blacks (including those in San Francisco) voted for Prop 8—which gave the proposition a majority statewide vote? No. The truth is that San Francisco always has a conservative minority on everything. In June, for example, 25% of San Francisco voted to ban rent control – even though Proposition 98 lost big statewide. With all the complaints I have about the “No on 8” campaign – and how they totally blew it with African-Americans – they did very well locally. San Francisco strongly supported marriage equality.

But what about San Franciscans supporting JROTC, rejecting public power and prostitution, or flushing down the George W. Bush Sewage Treatment Plant? That doesn’t mean we are a conservative electorate. All of these measures had their problems, and the so-called “liberal” point of view wasn’t supposed to prevail. In fact, as I argued on Wednesday, the SF Democratic Party’s slate card went a long way to narrow the margin in those races – preventing what should have been a more decisive “conservative” vote.

As much as the Chronicle wants to believe otherwise, we’re still a left-wing town.