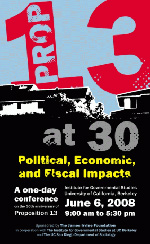 I majored in political science at Cal – and while I had an excellent education, the Political Science Department was always a bit out of touch. Today, UC Berkeley’s Institute of Governmental Studies will host a one-day conference on the 30th Anniversary of Prop 13 – where a field of experts will evaluate its “political, economic and fiscal impacts.” Incredibly, none of them will talk about rent control (at least none of them are experts on it), although one of Prop 13’s most significant effects was the passage of rent control ordinances in cities throughout California. Tuesday’s crushing defeat of Proposition 98 – sponsored by the same Howard Jarvis Taxpayers’ Association that pushed Prop 13 in 1978 – demonstrates a statewide mandate for laws that protect tenants. Any serious reflection on Prop 13’s thirty-year legacy must involve rent control.

In June 1978, the right-wing Howard Jarvis Taxpayers Association pushed Proposition 13 on the ballot – amid rising property taxes and a deadlocked state legislature that wouldn’t solve the problem. No doubt Prop 13 passed because elderly homeowners were afraid of losing the “American Dream,” but residential landlords also played a factor in making it happen. Tenants were told that if Prop 13 passed, landlords would pass their property tax savings in the form of lower rents. After they broke that pledge, rent control was born.

Nowhere is this more obvious than Berkeley – where tenant groups tried in vain to pass rent control in the 1970’s. After a crushing defeat in 1977, rent control was presumed dead until Prop 13 passed the following year. In November 1978, Berkeley voters passed Measure J – which mandated that landlords pass 80% of their Prop 13 savings to renters. Two years later, voters enacted a permanent rent control ordinance – which is alive today.

A similar thing happened in San Francisco. In 1978, voters narrowly defeated a measure to have landlords pass 100% of their Prop 13 tax savings to tenants. Sensing that a rent control ordinance was inevitable, the Board of Supervisors and Mayor Dianne Feinstein passed one in 1979 – which is why many San Franciscans can still live in the City today.

Similar rent control ordinances also passed in Santa Monica, West Hollywood, East Palo Alto and Cotati – along with weaker measures in Los Angeles, San Jose and Oakland. Over 100 cities in California also have rent control for mobile home parks. Today, over one million households across the state are covered by some form of rent control.

By 1980, landlords were so concerned about the growing momentum for rent control that they placed a statewide Proposition on the ballot to abolish it. But a strong grass-roots movement defeated this measure, including TV commercials with actor Jack Lemmon. Landlords did get the state legislature to pass the Ellis Act in 1986 and Costa-Hawkins in 1995, but they have never succeeded in completely killing rent control for thirty years.

Of course, Prop 13 had a huge impact on the California state budget that still haunts us today – along with decreased property taxes that have ruined our local public schools. So it makes sense for the UC Berkeley forum to include budgetary experts. But besides Terri Sexton, an economics professor at Cal State Sacramento who will talk about “Prop 13 and Residential Mobility,” none of them touch on housing. And “residential mobility” will probably focus on Prop 13’s effect on homeowners (rather than just renters.)

It’s not like Berkeley’s Political Science Department could not find rent control experts to talk about Prop 13’s effect. Myron Moskovitz (who was one of my law professors at Golden Gate University) wrote Berkeley’s Rent Control Ordinance, convinced Governor Jerry Brown to veto rent control repeal and is the state’s foremost expert on landlord-tenant law. Marty Schiffenbauer led Berkeley’s rent control campaigns, both before and after the passage of Prop 13. Both still live within walking distance of the Cal campus.

They could have also invited Christine Minnehan of the Western Center on Law & Poverty, who lobbies the state legislature on rent control issues – and was an aide to State Senate President David Roberti. I can’t think of a better expert on the politics of rent control today, and she could provide detailed knowledge about Prop 13’s impact. She lives in Sacramento, and could have come down to the forum.

When I was an undergrad at Cal, the Political Science Department sponsored a panel for students about what they can do with their political science degree. But without thinking it through, they scheduled it on Election Night at 7:00 p.m. I was too busy getting people out to vote, so did not attend – but I expressed my displeasure with the Department’s secretary. Today’s forum proves that an “ivory tower” mentality still governs a public university that boasts one of the best Political Science departments in the nation.

UPDATE: Today’s San Francisco Chronicle has a huge front-page story on the 30-year legacy of Prop 13 — along with three opinion pieces on the editorial pages on whether it was a good thing. Although the Chronicle is the major newspaper of record for the Bay Area — where four major cities have rent control — none of the articles made any connection between Prop 13 and rent control.

EDITOR’S NOTE: Paul Hogarth graduated from UC Berkeley with a Political Science degree in May 2000. He was elected to the Berkeley Rent Stabilization Board later that same year, got his J.D. at Golden Gate Law School in 2006, and is now a tenants’ rights attorney in San Francisco.