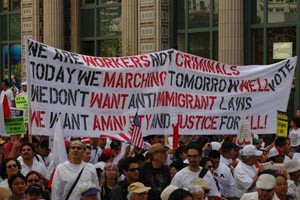 One year after millions of immigrants and their supporters took to the streets demanding amnesty, the drive for progressive reform is at a crossroads. Although House Republicans lost seats in 2006 over their anti-immigrant stance, the early start of the 2008 presidential nomination process has further shifted the Party’s immigration position to the right. This has darkened the once bright prospects for enacting meaningful reform in 2007, as President Bush will not sign a measure without Republican support. This political environment has split progressives over strategy: work to get the best deal possible now, or wait for a Democratic President in 2009. Those in the former camp are supporting the STRIVE Act of 2007, which grants six-years of temporary legal status but requires immigrants to first return to their home countries in order to obtain US citizenship. Can a progressive split over immigration strategy be avoided?

As crowds take to the streets on May 1 to protest the Bush Administration’s raids on immigrants’ homes and workplaces, an internal debate rages in the immigrants’ rights community.

On one side are those who believe that progressives should not support federal legislation that offers less than complete and unconditional amnesty for undocumented immigrants. This means no compromises around “guest worker” policies, no mandates that immigrants first return to their native countries before returning as legal US immigrants—a process known as “touchback”—, and no different rules for longtime vs. recently arrived immigrants.

Other progressive interests, most notably the Service Employees International Union (SEIU), see the situation differently. They believe there is no chance that an ideal amnesty bill would ever pass Congress, and that allowing the perfect to be the enemy of the good in 2007 guarantees that nothing will be done to address legalization until at least 2009 (there is consensus that immigration reform cannot pass during a federal election year). In the meantime, all undocumented immigrants, including unionized janitors, will continue to face the daily risk of deportation. Such immigrants will also continue to be denied drivers’ licenses, subsidized housing, and access to many jobs.

SEIU is currently backing the Security Through Regularized Immigration and Vibrant Economy Act of 2007, known as STRIVE. Sponsored by Democrat Luis Gutierrez of Illinois and Republican Jeff Flake of Arizona, this grants six-years of temporary legal status but requires immigrants to first return to their home countries in order to obtain US citizenship.

SEIU and other progressive immigrant rights groups see STRIVE as a starting point for working out a comprehensive legalization deal. Progressives opposed to this approach see the entire idea of millions of immigrants having to exit the country and then re-enter as unworkable, and inconsistent with any solution they could support.

STRIVE also authorizes 400,000 visas for what supporters describe as “new” workers who would be on a path to citizenship, but what progressive opponents views as a retitled “guest worker” policy. The battle over including a form of “guest worker” policy in any compromise has split the AFL-CIO and Change to Win labor federations, with the former opposing it.

As is often the case among internal progressive disputes, there is a growing sense of anger and even bitterness over the differing positions on STRIVE. Although these differences are entirely strategic, there are already accusations that each side is betraying immigrants over their stance.

STRIVE would provide immediate legal protection to over eight million undocumented immigrants. This protection would last six years. Even if the legislation included no provisions for permanent citizenship, would this not be better for those currently at risk than the status quo?

And wouldn’t this six-year window enable progressives to build political support for a path to citizenship plan better than anything currently on the table? Rather than simply wait for a pro-legalization Democratic President in 2009—and all of the Party’s leading contenders are pro legalization —- why not get immediate protections against deportations, as well as access to benefits currently denied the undocumented, now?

This argument is persuasive, but the rebuttal is also convincing.

According to longtime immigration experts I consulted, recent history shows that whenever immigration reform occurs, it tends to foreclose future changes. This would mean that passing STRIVE in 2007 would not buy time for enacting a better solution in 2009, but would instead foreclose the opportunity for real reform.

Adding to progressive concern about STRIVE is that it does more than create a six-year protection zone, but does provide the outlines of a comprehensive reform measure. This would greatly reduce the likelihood that Congress would feel compelled to revisit immigration reform in 2009.

The biggest wedge within labor and progressive forces has involved the “new worker” vs. “guest worker” policy. The strategic question is: if the United States has a history of importing low-skilled temporary workers who drive down wages and working conditions, can a guest-worker program emerge that does not jeopardize worker protections?

The AFL-CIO and its allies say no, while SEIU and other immigrant rights backers say yes. As with everything else in immigration law, the answer will be in the specific details of the legislation.

Despite some progressive opposition to STRIVE, it represents the only potential legislative vehicle for immigration reform until 2009. While SEIU and other community groups’ work to improve the measure, its opponents have essentially decided to keep the status quo and work for a better measure in two years.

But such inaction will not sustain or grow the movement.

One reason that the May 1, 2007 immigrant rights marches will have nowhere near the numbers of 2006 is that immigrants bought into the idea that “Today we March, Tomorrow we Vote.” After voting in huge numbers in November 2006, Latino immigrants want results—and this means more than telling people that they need to wait until Congress convenes in 2009 to see any meaningful change.

Immigration reform arouses strong emotions, but progressives need to stop the thinly-veiled attacks. Intense grassroots organizing could pressure Congress to back progressive amendments to STRIVE, but if progressives sit on the sidelines, an inadequate bill becomes a self-fulfilling prophecy.