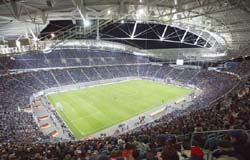 Within the progressive community, there have been long-standing critiques of sporting events. As a key ingredient in the formation of national identity, sporting events have long perpetuated images of self, nation, patriarchy, and the system of labor. Many see soccer and the World Cup as a “distraction” from the world’s true problems. The Cup itself, also exacerbates some problems. In England, alone, there is a 400-700% increase in domestic violence during the World Cup, and Germany, with legalized prostitution, trafficked an estimated 40,000 women into the country just for the Cup.

Already, 500 people have been arrested for violence, mostly English fans chanting racist epithets right before the Ecuador game. This the ugly side of the game, but as George Orwell described, soccer is “war minus the shooting,” and while it reinforces ideologies, it is also the sphere for change. I grew up watching the Pumas of Mexico City. This was our team-as my parents were both students at UNAM in the 1960 and then my mom, eventually a professor there. The Pumas, still having a strong association the University, a progressive institution in Latin America, and their arch-rivals were the other Mexico City team, America, the embodiment of capitalism, corruption, and private enterprise. Many teams in Europe and Latin America have their roots in resistance and union identity. During Franco’s repressive rule in Spain, it was current Euro champions FC Barcelona that stood up to the fascist Real Madrid and proclaimed Catalan regional identity. Italian club AS Livorno wave banners of Che Guevara and are visibly pro-communist. Glasgow Celtic in Britain propagated Irish liberation, and Israel’s Hapoel Tel Aviv FC, is a working-class mixture, of Mizrahi or middle-eastern Israelis, Arab-Israelis, and Africans (as witnessed by Ghana’s John Pantsil) whose flag is a hammer and sickle. In the populist wave that is gripping Latin America, Brazil’s president Lula, is a self-described fanatic, and the mythic Diego Maradona who once represented all the excess of Argentina now hangs out with Fidel Castro and Hugo Chavez.

Soccer’s brand of nationalism is quite complicated. Watching the Mexico v. Argentina at La Boheme in the Misson, I wondered how many of the patrons had escaped the military junta, or watching Iran play did Iranian-Americans who were forced to leave their home country feel ambivalent? I’m also amused by the number of English bloggers who refuse to cheer for the English. The Germans, whose nationalism has not been a happy home-coming for most anybody, will make it to the quarter-finals because of their German super-stars, the Polish-born Klose and Podolski. Australia’s impressive team were mostly Croatian immigrants (of which Croatia had been trying to convince to re-patriot to the motherland). While still a male sport, many of the fans are women. Look to the stands of Brazil, Iran, Ghana, Italy, there are hordes of women there.

We’re almost down to eight teams, and Round 16 yielded the best, most boring, and worst game yet of the World Cup. Mexico, finally decided to play like the #5 ranked team in the World, but it was not enough to stop the Argentines who are out to prove that twenty years later, they have more Maradonas in the form of Lionel Messi and Hernan Crespo. In the Cup’s most beautiful game yet, Argentina and Mexico gave it there all; Mexico outplayed and out-hustled the Argentines, but in the first half of overtime play, Maxi Rodriguez scored the World Cup’s first perfect goal. Trap and shoot. This is a basic of soccer, but Rodriguez executed it with such skill, not allowing the ball to even touch the ground before aiming it to the top left corner of Mexico’s Oswaldo Sanchez’s net. If only Mexico had played like this against Portugal. Then there was the Portugal and Netherlands game. It seemed as if those two teams had been long-standing arch-rivals and the game deteriorated to a series of fist-fights, chaotic, and mean-spirited playing. The Russian referee will be forever remembered for the number of red and yellow cards doled out, and for having no control over the game. Though Portugal won, they will have a hard time against England, now that two of their top players are out including Costinha and Deco.

The most boring game award is given to the Ukraine and the Swiss, who didn’t manage to score until Penalty shots after what was hours of uneventful passing and running, with the Ukrainians eventually winning the game 3-0. In the most shocking win, the referee pratically gave the game to the Italians after awarding Italy a penalty shot against Australia with one minute left to go. It’s a shame because the Ausie socceroos were really proving themselves and played an impressive game. Now the next few games should be great with teams like Germany playing Argentina, but expect the Argentines to make it to the final game. I don’t know how the ageing French team made it through, but the Brazilians will get them back for their loss in the 1998 World Cup and in the next three games, we’ll see why Brazil are the reigning world champs. Expect more than half the world’s population to be watching the game along with you.