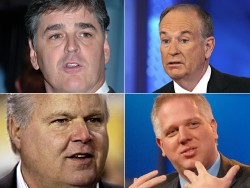 Since President Obama took office, the Republican Party’s agenda has dominated the public debate. FOX News and right-wing talk radio decide what’s news, and the traditional media either echoes the story or is criticized for not doing so, as occurred when the New York Times Public Editor chastised the paper for inadequately covering right-wing falsehoods about ACORN. But progressive media has also allowed conservatives to set the terms of the debate. MSNBC’s Keith Olbermann regularly devotes considerable time to rebutting FOX News lies, as do many progressive bloggers. This reactive approach ensures that fake stories like the nonexistent Ground Zero mosque control the news cycle, while stories confirming progressive policy successes get ignored.

In The Activist’s Handbook, I describe the importance of moving pro-actively, rather than fighting battles on opponents’ terms. The party that frames the debate usually wins, but progressives too often get sidetracked by responding to their opponents’ agendas rather than promoting their own.

So while progressives enjoy lampooning Sarah Palin, it’s striking how much time MSNBC and progressive bloggers spend talking about her. She becomes a perfect foil for getting progressives off-track, with she and her right-wing allies getting the last laugh.

From “Death Panels” to Mosques

While right-wing media chooses stories that serve its political agenda, progressive media increasingly covers the same “news.” True, the focus is on disproving right-wing accounts, but from the “death panels” for granny to the alleged “Ground Zero” mosque, the right wing is setting the agenda for the progressive media.

No wonder Americans are unaware of President Obama’s many accomplishments, or think that he, rather than President Bush, signed the unpopular bank bailout bill. With progressive media primarily focused on rebutting conservative “news,” little time is left to promote stories that build support for progressive policies.

President Obama’s daily actions are covered, as are Congressional hearings and the enactment of progressive laws. But these stories do not echo through the media, unlike the phony “news” invented and recirculated endlessly by FOX.

And, unlike progressive media, FOX and right-wing radio feel no obligation to cover stories that boost their opponents. The right-wing media avoids news that does not serve their cause, which limits stories from echoing through the broader public.

That’s why so few Americans know about the Ensign, Vitter and other Republican political scandals, but everyone knows about Charles Rangel’s problems. And why many are unaware of the jobs created and preserved by the Obama stimulus, or about the many positive actions Obama officials at the EPA have taken to improve the environment.

Many noted how the media never connected former President Bush to the Exxon Valdez spill, but directly associated Obama with BP’s reckless conduct. That’s because FOX News and others made Obama the issue from the start, and traditional media either parroted this line or joined progressives in noting that the Bush Administration imposed lax oil drilling regulations; either way, FOX’s framing of Obama as a central figure in the spill prevailed.

Why the Obama Media Machine Fails

How did the once vaunted Obama media machine lose control of the narrative of his presidency? The answer is simple.

During the fall 2008 elections, the Obama campaign had so many field staff that they could get their narrative out to voters without relying on the media. In addition, the media has less discretion in story selection, since coverage is largely dictated by the candidates’ daily schedule.

This means that while FOX News spends campaign season injecting false issues, the traditional and progressive media do not bypass reporting on the candidates’ daily events to focus on such lies. But in between elections, a media hungry for “news” figures that if FOX is covering a story 24/7 than it warrants broader coverage (and no matter how absurd the story, such as the summer 2010 invention of so-called Black Panther Party voter suppression in 2008, its saturation coverage on FOX now guarantees traditional and progressive media response).

Grassroots election work this fall will boost the progressive narrative of the Obama/Pelosi years. But right-wing media has fostered such a profound level of public disinformation that correcting the record is a steep challenge, one that would be less had progressives thought more strategically — and had the Obama Administration cultivated progressive media as aggressively as it has its enemies at FOX News.

Give Palin and Right-Wing Extremists a Rest

Here’s a thought. What if the progressive media stopped reporting on every silly idea promoted by Sarah Palin and used that time to report on positive actions by the federal government to help people. I get emailed press releases announcing such accomplishments each day, so the stories are out there but are not covered.

Or the progressive media could use the time it saved by ignoring Palin to do stories on the nation’s tax and budget policies, which on a daily basis are subject to massive but unrebutted media disinformation from the right.

How much coverage did progressive media give to the enactment of a new, far more progressive student loan bill? Wouldn’t promoting this issue help voter turnout on campuses this fall, so that such coverage would do more to get young Democrats to the polls than the latest jokes at the expense of the Palin family?

To be clear, this does not mean ignoring comments made by Sharron Angle and other political candidates affiliated with the American Taliban; rather, it means avoiding interviews with the minister who plans to burn the Koran on 9/11, avowedly racist Tea Partiers, and the other political cranks who are not Republican candidates in November.

I understand that the traditional media is driven by an audience that is whiter, older, more affluent, and more politically conservative than the overall public. This makes it even more imperative for progressive media to stay proactive, rather than continually responding to the latest FOX hysteria.