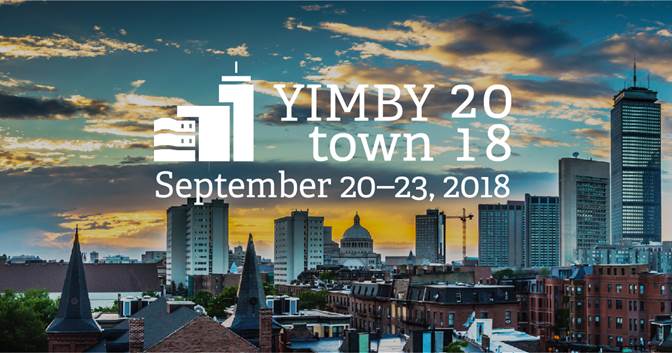 When historians try to discover when YIMBYs became mainstream, they may point to the September 12, 2018 Jeopardy game show. It included the answer, “YIMBY Stands for This, As Some Neighborhoods are Okay With Attracting Affordable Housing.” And a contestant was ready with the winning question, “What is Yes In My Backyard.”

The core YIMBY belief that cities must build a lot more housing to meet job and population growth is increasingly accepted by housing and green activists, reporters, editorial boards and, most importantly, voters.  The combination of rising housing prices and the need for infill housing to reduce greenhouse gas producing commutes has proved a powerful YIMBY recruiting tool.

But there is much work to be done. As YIMBYtown 2018 opens in Boston on September 21, here’s my assessment of the movement’s progress since YIMBYtown 2017 and its future challenges.

Soon after the 2017 YIMBY conference California enacted more bills to expand housing than in the preceding decade. An alliance between nonprofit housing groups and YIMBYs, coupled with aggressive legislative advocacy by pro-housing politicians like San Francisco’s David Chiu, Scott Wiener (both played pivotal roles) and the East Bay’s Senator Nancy Skinner made a huge difference.

One bill Chiu sponsored eliminated the legal uncertainty over inclusionary housing which had led Los Angeles, Oakland and other cities to avoid enacting such laws. That bill, along with a real estate recording fee targeting money to affordable housing, had previously failed. California also placed a $4 billion affordable housing bond on the November ballot.

YIMBYs were not alone in pushing for these state measure but their social media visibility and activist turnouts  made a huge difference.

Similar pro-housing coalitions grew in 2018 to build influence in Austin, greater Boston, Denver, Minneapolis, Oakland Portland, Seattle and other cities. In each city YIMBY activists led or contributed to the drive for building apartments in single family home neighborhoods and/or pushed for more housing.

Last week, Portland’s planning commission voted to re-legalize duplexes and triplexes in single family home neighborhoods, and to increase affordability incentives citywide. Let’s hope this proves an encouraging sign to come for Minneapolis’ efforts to legalize fourplexes citywide and for similar efforts in Seattle and other cities.

Overturning decades of misguided land use policies does not happen overnight.  Homeowners who want to keep fourplexes and “missing middle” housing out of their neighborhoods have not gone away. Nor have the politicians who rely on these homeowners for votes and money.

As a result, the past year has shown a disconnect between YIMBYs and some city officials over the pace of change. YIMBYs see the urgency of the housing crisis and worsening climate as obvious evidence that cities must change zoning laws to build a lot more infill housing. Many politicians,  however, still remain beholden to anti-housing interests.

In 2018 Austin’s multi-year effort to reform a land use code that promotes segregation and exclusionary single-family home zoning ran into fierce opposition from powerful homeowner groups. The battle over the reform process known as Code NEXT became so vicious that the mayor and its Council backers voted on August 9 to pull the plug and restart the process. The question now is how any process can avoid the problems that killed CodeNEXT, and how the new apartments Austin desperately needs can get built when zoning laws make them illegal in much of the city.

YIMBYs biggest challenge in 2018 was likely sharply rising construction costs. In 2016, Los Angeles voters passed Measure HHH, a $1.2-billion bond measure to finance the construction of 10,000 units. Yet rising costs have reduced the projected new units to 6000.  The cost of building a single affordable apartment in San Francisco now exceeds $700,000, making inclusionary housing—in which the developer must provide a percentage of affordable units—as well as a shift to modular housing even more vital.

But while targeting new housing to transit corridors seems like a winnable fight, how this happens can become controversial. In 2018 California YIMBYs backed SB 827, which preempted some local controls to increase housing density along or near transit corridors. Strongly backed by academics, editorial boards and YIMBYs SB 827 unleashed a storm of opposition from Los Angeles officials in particular along with tenant and community groups and was quickly defeated.

In April I wrote “Special Report: Why SB 827 Failed.” I did so in the hope that a future measure could build the broad support necessary to overturn the restrictive zoning along transit corridors that bars much needed housing. Chief SB 827 sponsor Scott Wiener plans to introduce a new version in 2019 and its success (or failure) could prove a model for YIMBYs in other states.

Such alliances are clearly feasible. Many YIMBY activists are themselves progressive, affordable housing advocates, as I demonstrate in my interviews with them for my new book, Generation Priced Out: Who Gets to Live in the New Urban America. The challenge for both sides is overcoming false stereotypes and activists meeting personally with each other rather than strictly relying on social media.

While getting more housing built on transit corridors is not alone a solution, if YIMBYs cannot win that fight trying to increase density in single family residential neighborhoods will prove even harder.

I’ll be speaking on how to build YIMBY-equity group alliances in my YIMBYtown session Friday at 11am. I’m looking forward to an inspiring conference.

Randy Shaw’s  new book, Generation Priced Out: Who Gets to Live in the New Urban America, will be available from UC Press in mid-October and can be pre-ordered now.