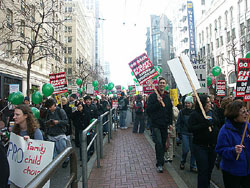 A coalition of abortion rights activists is organizing a counter-demonstration Saturday to protest a rare pro-life event in San Francisco. The demonstration—which is convened by the broad-based Bay Area Coalition for Our Reproductive Rights (BACORR)—will line the route of the “Walk for Life” and coincide with the 33rd anniversary of the landmark Roe v. Wade decision.

The event will begin with a rally at Pier 1 at 11 a.m. featuring San Francisco Supervisor Ross Mirkarimi. Then demonstrators will take their places along the walk route armed with signs and chants. In addition, there will be a sign-making party Friday at 4:00 p.m. at New Valencia Hall, 1908 Mission Street.

The second-annual Walk for Life, organized in part by the Catholic archdiocese of San Francisco, will take pro-life demonstrators on a 2.5-mile route through downtown San Francisco. In recognition of San Francisco’s traditionally liberal political bent, organizers have asked participants to tone down their message. A notice on the Walk for Life website advises demonstrators to leave “signs displaying graphic images of aborted children” at home. According to organizers, the walk drew 7,000 people last year.

Pro-choice activists said that the demonstration is part of an anti-abortion offensive in the Bay Area, including a recent crop of ads on BART trains.

“There is an emboldened right wing movement,” said Toni Mendicino, a member of Radical Women. “People are scared and instead of fighting back they’re trying to acquiesce too much. This demonstration is about fighting back.”

Organizers added that they’re confident that people will turn out for reproductive rights.

“It is urgent that U.S. feminists re-ignite a movement like the one that secured abortion rights in 1973, and hit the streets in self-defense,” said Elizabeth Creely, an organizer for BACOOR.

Sponsors of the event include the San Francisco Labor Council, ANSWER-SF, Green Party, and several unions.