Pride for the Chosen Few 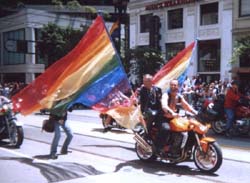 Every year, the glossy invitation arrives without fail. Every year, I clip it to the calendar in my kitchen and then forget about it until later in the summer when I toss it into the recycling bin. It’s no accident. I never have any intention of attending the event it’s promoting.

I can never understand why I always get invited to this exclusive “SF Pride VIP Party” at City Hall during the annual pride parade on the last Sunday of June. Sponsored by a bevy of corporations, including AT&T, Bud Light, Clear Channel, Wells Fargo, Smirnoff, San Francisco Chronicle and others, it is billed as a “special reception under the Rotunda of City Hall.”

Special for whom? Not for the hundreds of thousands of ordinary queers and their supporters who make the long trek up Market from Embarcadero to Civic Center. Not for the poor queers who live in the Tenderloin area near the gold-trimmed dome of City Hall. Not for those who aren’t connected enough to get one of those invites.

Talk about elitism. Nothing could be further removed from the original intent of pride celebrations than an invitation-only gathering in City Hall to mark the annual queer pride “parade,” as it is now called.

I was an organizer of Philadelphia’s first pride “march” (as we called it) way back in 1972. We weren’t looking for fancy receptions in City Hall. We were about drawing queers into the streets to declare to the world that there were indeed more of us than anyone could ever imagine. We were about being in-your-face. We were about building a grassroots movement that would fight for the right of all of us to be ourselves.

We’ve come a long way, baby, from the grassroots struggle that we birthed at Compton’s and Stonewall, a movement that shouted out the love that dare not speak its name for all to hear, whether they liked it or not.

Here in San Francisco, as in many big cities, queers have built a strong political base within the Democratic party establishment that keeps us safe from the kinds of homophobic attacks we suffered in decades past.

Gone are the days when gay bars were raided because owners failed to make payoffs to the police. Or when queens could be thrown in jail for “impersonating the opposite sex.” Or when two consenting adults of the same sex could be prosecuted for sexual activity, even in the privacy of their own home.

I’m glad that those days are gone.

I’m not pleased to see that our once rowdy, radical marches have turned into VIP receptions at City Hall.