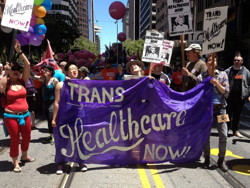 On Pride Sunday, San Francisco Pride at Work/HAVOQ along with a large contingent of OccuPride activists streamed into the street in front of the Kaiser Permanente float, surrounding their pink thrive balloons with the message, “Trans people don’t thrive when Kaiser discriminates.” Pride at Work decided to take action as part of an ongoing campaign to push Kaiser to remove the discriminatory exclusions in Kaiser insurance plans that make it so that most transgender patients at Kaiser can’t get the care they want, and that their doctors recommend.

Soon we were having interesting conversations with Kaiser staff, many of whom stuck our pink and teal “trans-healthcare now” stickers on their t-shirts. As the crowd mingled Jane Martin explained, “We know that there are many wonderful staff at Kaiser who have been fighting for years to make Kaiser a place where transgender people can receive quality care, but we are here to send a message to the Kaiser administration about their policies that deny coverage for important medical needs, discriminating against Transgender people.”

Then the march was surged forward, singing, “two, four, six, eight Kaiser don’t discriminate!” Parade monitors formed a line trying to keep the groups separate as protesters pasted out trans healthcare now stickers and fliers that explained Kaiser’s policies to the crowd. “We can’t let a corporation that discriminates against any part of our community get away with marching in the parade without speaking out,” said Sal Alper.

Throughout the parade the parade monitors tried to keep the to groups away from each other, stopping the parade for lengths of time, but effectively making sure that the crowd saw and heard the Kaiser protest right before they saw the Kaiser float. A handful of protesters walked along side the Kaiser contingent with the signs about how Kaiser discriminates through out the protest. “Trans folks are the only group discriminated as a whole in health plans.” said Lynn Riordan SF Pride at Work member. “Kaiser needs to do the right thing and sometimes you need to give them a push to do it.”

This action was part of a long-term campaign at SF Pride at Work/HAVOQ to get insurers to remove their discriminatory exemptions against transgender people out of ALL of their policies. It isn’t enough to push one employer at a time to adopt a transgender inclusive healthcare policy at extra cost. It took workers at the City of Berkeley years to get an inclusive plan even after the city council voted to offer one. To go employer by employer is slow and incomplete, and as the labor movement historically found that it was necessary to push for minimum wage or in San Francisco mandatory sick day legislation SF Pride at Work pushes for non-discriminatory insurance policies.