Presidential Primaries Could End Sooner, Dooming Us in the General 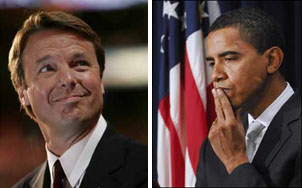 Remember how fast Howard Dean’s campaign came crashing in Iowa, making John Kerry the nominee in the blink of an eye? Not only did it shut out most voters, but we then had a long general election season with “Bush v. Kerry” dominating the news every day. Once it ended, many Democrats lamented how weak a nominee Kerry had been with a nauseating sense of buyer’s remorse.

Now Michigan wants to set its presidential primary on January 15th (before New Hampshire), after Florida broke the rules and moved up to January 29th. Iowa and New Hampshire are threatening to go even further back. The two parties could firm up their nominees by early February, helping the early front-runners who have high name recognition. And a nine-month general election campaign is extremely unhealthy, as voters will inevitably lose interest and move on with their lives – leaving Democrats stuck campaigning for Hillary Clinton.

I have written extensively about how ridiculously front-loaded our presidential primary schedule has become – with every state selfishly playing a game of “me-first!” without regard to the rest of the country. The Democratic National Committee tried to inject sanity in this year’s madness by setting up a schedule: (a) Iowa on January 14th, (b) Nevada on January 19th, (c) New Hampshire on January 22nd, (d) South Carolina on January 29th. No state could go before February 5th, or else risk losing delegates at the national convention.

So what did every other state do – like California, New York, Florida and Michigan? They all moved up their primaries to February 5th, thinking they were “so smart” to give themselves more influence. State legislators would proudly tell their constituents how great their state was, and how they were empowering their voters by giving them more influence in selecting the next President of the United States. But with practically a national primary on February 5th, each state’s influence has been diluted.

Whatever the final schedule looks like, we all know that the primary schedule will start a lot earlier. That helps current front-runner candidates like Hillary Clinton, who has much wider support among less informed voters. There’s no question that if the nomination were decided today, she would win. But with the front-loaded schedule, we also know that the primary season will end a lot sooner. And what exactly is going to happen in the presidential campaign between February and November, when reporters have nothing to write about?

It’s quite a contrast from the 1968 election cycle, when Eugene McCarthy rocked the establishment with a strong finish in New Hampshire that convinced Lyndon Johnson to retire from politics. At the time, the first-in-the-nation primary was on March 12th. By March of this year, we will certainly have picked the nominees of both parties – leaving a soporific period of bored news reporters writing about the two party nominees. Expect them to get so tired writing the same stories over and over again that they will start talking up third-party options like Mike Bloomberg.

Right now, Hillary Clinton is hoping to get the Democratic presidential nomination on the basis of “inevitability.” She’s ahead in the polls, is lining up support from top party establishment leaders, and is raking in tons of money. There is nothing that her campaign would want more than to see the party line up behind her – regardless of her weaknesses as a general election nominee. From her perspective, it would be better to have the primaries over and done with now. If this happens before more voters start paying attention, such a strategy could work.

And if each state continues to play “me-first” in the primary schedule so that we have the New Hampshire primary in December 2007 (or October? or September? or tomorrow?), we are making this a foregone conclusion. The big loser in that process, of course, is democracy – as well as an enlightened decision-making process.