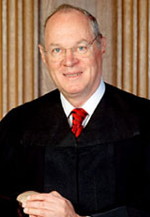 Yesterday’s trio of Supreme Court decisions – on Arizona’s racist anti-immigrant law, Montana’s campaign finance reform measure & life sentences for juveniles – confirm what has increasingly been the case: Justice Anthony Kennedy has absolute power over what laws are constitutional. In an opinion written by Kennedy, 5 Justices rejected Arizona’s SB 1070 on federal preemption grounds (except for the “show me your papers” part.) Kennedy joined the four conservatives in declining to revisit the Citizens United decision, and sided with the four liberals to bar mandatory life sentences without parole for juveniles. Before she retired from the bench in 2005, Sandra Day O’Connor was the other swing vote on the Supreme Court. When George Bush replaced her with ultra-conservative Samuel Alito, it left Kennedy as the sole arbiter. But there was a crucial distinction between them – as an ex-politician, O’Connor would generally attempt “compromise” in her decisions. Anthony Kennedy is just as much an ideologue as the other Justices – he just happens to be a libertarian, and now he decides every case.