Predictions for 2009: America’s Road to Change 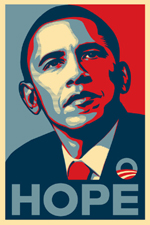 For the first time, I approach a new year optimistic that the United States government will implement progressive change. The Obama Administration and Congress will invest hundreds of billions of dollars in new jobs, enact dramatically new energy policies, implement universal health care, impose long overdue labor law reforms, and reverse the Bush Administration’s reactionary social and (anti) civil rights agenda. George W. Bush’s failures have made even radical change politically possible, and President Obama will seize upon this in 2009. While the new president faces a potential pitfall – that his proposals, particularly on health care, will be seen as reformist rather than transformative – Obama knows better than anyone the nation’s hunger for meaningful rather than cosmetic change. Obama’s political astuteness will enable him to do for progressives in 2009 what incoming President Ronald Reagan did for the Republican right in 1981: enact an agenda that both serves and expands his political base. Here’s my detailed assessment.

Barack Obama has yet to assume the presidency, but his commitment to progressive policies on such issues as health care, global warming, and workers rights is already clear. While some are troubled by Obama’s reliance on ex-Clintonites, we have witnessed none of the troubling appointments (Zoe Baird, the withdrawal of Lani Gunier et all) that dampened progressive hopes as Bill Clinton took office in 1993.

It takes no great insight to predict that Congress will pass an economic stimulus package of between $675-900 billion soon after President Obama’s inauguration. The only question is whether the stimulus package is disproportionately bridges, roads and highways – which certainly would not represent “change” – or whether teachers, cultural and social service workers get a meaningful piece of the pie.

I think Obama and Congressional leaders will put enough in the package to please everyone, and that Obama will be widely credited for the result. The package’s inclusion of billions for “green” jobs will mute progressive criticism even if our human infrastructure gets too little of the pie.

The President’s other predictable early moves – such as ending the abortion counseling gag rule, opening up stem cell research, reversing an array of Bush Executive Orders and anti-environmental rules, closing Gitmo, and stopping ICE raids on immigrants – will also keep Obama’s approval rating (currently 82%) high. His popularity will likely stay at this level through March.

Obama’s success in 2009 will be primarily judged on health care. Progressives spend so much time arguing over differences in universal health care plans, and over whether single payer is the only valid reform, that it is easy to forget that Obama’s enactment of his campaign’s health care proposal would represent the greatest advance in the nation’s social safety net since the passage of Medicare in 1965, or perhaps since Social Security’s enactment thirty years earlier.

Tom Daschle, the former Democratic Senate Majority Leader, has been charged with getting universal health care through Congress. Obama has wisely empowered a veteran political dealmaker – popular on both sides of the aisle – to get the job done, in sharp contrast to Bill Clinton’s empowering a similar task in 1993 to his Washington outsider wife.

Expect Obama to use every ounce of his vast political skills to get Congress to enact universal health care before the summer break. He will do so for two reasons: he cares about the issue, and he knows that restoring people’s confidence in government requires that the public sector provide concrete benefits – none of which is greater than health care.

Labor law reform will be a trickier matter. My prediction: the Employee Free Choice Act (EFCA) prevails largely intact, with the possible exception of a modification of the current language allowing card check as an alternative to secret ballot elections.

The United States has the most anti-union labor laws in the industrialized world, and labor will win critical changes. Employer groups are waging an all out war against the current draft of the card-check provision, but there is room for labor to make enough concessions to overcome a filibuster while still winning passage of a very strong card-check bill.

Described by Rahm Emanuel as the “third rail” of American politics, many believe Obama will put it off this issue until after the 2010 elections. I disagree.

First, doing nothing is not an option. After Obama orders a stop to the hateful ICE raids that have terrorized immigrants and damaged communities throughout 2008, pressure for a comprehensive solution will come from all sides.

Second, the immigrant rights movement will mount a massive grassroots campaign for comprehensive reform. True, internal disputes over details remain, but the stakes demand that Congress pass a measure next year that prevents the deportation of the nation’s eight to ten million law-abiding undocumented immigrants.

Barack Obama did not run as a McGovern-style anti-interventionist progressive. His adamant support for adding troops in Afghanistan, and his selections of Hillary Clinton as Secretary of State and James Jones as National Security Advisor, should dispel any notion that Obama is anything close to being a disciple of Noam Chomsky.

Many progressives will be disappointed by Obama’s position on Israel and the Middle East, and his likely unwillingness to make the major cuts in the military budget that our national economy demands. But he will succeed in raising the U.S. image around the globe, and is unlikely to engage in the provocative military interventions that have occurred in virtually every presidential administration since Calvin Coolidge.

Will Obama seek to finally change our wrongheaded policies toward Cuba, and much of South America? Will he reach out to Bolivian President Morales, Nicaragua’s Ortega, or other progressive leaders treated hostilely by Bush (Hugo Chavez not included)?

I wish I could predict that Obama will dramatically change our foreign policy toward South America, Central America, Mexico, and the Caribbean, but this shift certainly won’t happen in 2009. It would take the emergence of a nationwide grassroots movement to push Obama to shift U.S. foreign policy in these regions, and current prospects of this occurring during his first term are not good.

But we’ll assess 2010 and beyond next January.