“Precious:” Based on the Novel “Push” by Sapphire 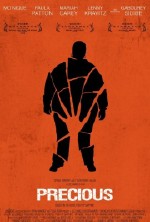 The film’s central character Clareece “Precious” Jones (Gabourey “Gabby” Sidibe) lives in 1987 New York City. She’s a black teenager who dreams of such things as being on a magazine cover and having a light-skinned boyfriend.

However, Precious’ real life makes such hopes highly improbable. Her mother Mary (Mo’Nique) verbally and physically abuses the teen constantly, reminding her she’s stupid and fit only for collecting welfare. The teen is both illiterate and enormously overweight. She’s also a mother with one mongoloid child and another on the way. Both children are the product of incestual rape by Precious’ father.

Precious has thus become accustomed to expect further disaster to intrude onto her life. Shortly after the film begins, the principal suspends the teen from school for her latest pregnancy. However, that suspension comes with a transfer to an alternative school. There, Precious meets Ms. Rain (Paula Patton), the teacher who shows the teen that the path to her personal liberation begins by learning to write about herself in a personal journal.

The early parts of Precious’ story can be extremely upsetting to watch. Mary’s monstrous abuse of Precious falls into the category of treating her daughter as a virtual slave. The incestual rape that results in Precious’ second pregnancy catches one off guard with its unflinching detail. Yet the fantasy sequences that Precious mentally leaps into helps the teen keep her spirit afloat when her brutal life becomes particularly unbearable. One memorable fantasy sequence adapting a period Italian neorealist film to Precious’ story provides comic relief after one particularly nasty moment between the daughter and her mother.

Right-wing viewers of “Precious” (if any) will probably batten on the film’s depictions of Mary’s welfare scamming and Precious’ teen pregnancy as confirming their prejudices about the subhuman nature of poor urban blacks. Yet such harping on stereotypes is based on the unspoken assumption that poor urban blacks can never be more than welfare scammers and single pre-adult matrons. Precious’ story shows that despite her horrific personal background, given the right support, a person can rise above the problems of one’s past.

Ms. Rain, who provides such educational and emotional support to Precious, definitely qualifies as an inspirational teacher. But there is nothing sentimental or stereotypical about the support she provides to the teen. There is an expectation that the teen also take steps towards liberating herself. The scene showing Ms. Rain standing in a lighted hallway and Precious sitting in a semi-dark waiting area provides a somewhat obvious visual encapsulation of this message.

Precious’ fantasy sequences provide most of the film’s major attempts at visual flourish. Yet they don’t provide the liberating thrill a viewer may typically expect. This deliberate choice underscores the point that the strength Precious finds in facing the horrors of her life does not come from her unreal escapes.

The ultimate key to “Precious”’ power lies in several memorable performances. Mo’Nique’s performance as the abusive Mary is effectively monstrous because the viewer is shocked at how the mother-daughter bond between Mary and Precious has given way to 24/7 attacks by Mary and Precious’ painful inability to fight back. Mariah Carey’s performance as social worker Ms. Weiss turns out better than expected thanks to Carey’s focussing on creating a credible character rather than trading on her singing career glamor.

Paula Patton’s performance as Ms. Rain deserves the awards that have been bestowed on it. The viewer believes in the depths of the teacher’s dedication to her badly disadvantaged students. Patton reminds the viewer of the truths behind the claims of how good teachers can shape students’ lives for the better.

But the film ultimately succeeds because of Gabourey “Gabby” Sidibe’s performance as Precious. Her character appears to be the sort of person that would generally not be noticed positively on the street. Sidibe takes good advantage of the fact that the story is told from Precious’ viewpoint to let the viewer see the feelings that the teen lacks the words to express. She also makes believable Precious’ process of leaving behind the teen’s active burial of her feelings by showing the small steps forward and bad detours she takes along the way.

Sidibe and Patton play well off each other. When Precious winds up in the hospital, the epistolary journal entries between the teen and her teacher continues the struggle to ensure a better future for Precious and her child. Ms. Rain’s discovery that Precious is illiterate becomes an effective exercise in both minimizing the teen’s feelings of humiliation and finding a solution to help Precious improve herself.

“Precious” is the story of a heroine who learns to save her own life with the love and support of a teacher who believes in her potential. Precious Jones’ achievements may appear mundane. But they are no less important for the positive changes they bring to the teen’s former life.

(“Precious: Based on the Novel Push by Sapphire” opened in selected theaters on November 6, 2009.)