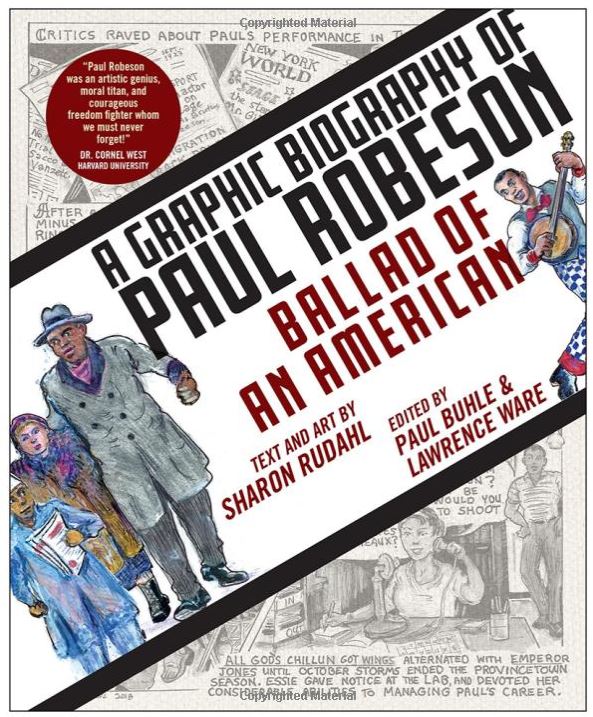 Paul Robeson lived an extraordinary life. If white, he might have become a governor or senator. And/or the nation’s leading actor on stage and screen. Absent racial barriers Paul Robeson could also have become a nationally renowned attorney and  potential Supreme Court justice.

He was a man who had an unprecedented combination of  talents. But opportunities for supremely talented whites in the Jim Crow era were blocked for Paul Robeson. Robeson’s grandparents were slaves who escaped the Underground Railroad in 1860.  His immense talents were constantly restricted by profoundly racist policies common throughout America; while high school history books cover two world wars for “freedom and democracy,” both were denied to the nation’s Black population.

Paul Robeson’s life has incredibly valuable lessons for today’s America. Sharon Rudahl, Paul Buhle and Lawrence Ware have now released A Graphic Biography of Paul Robeson: Ballad of an American, which captures the essence of why Robeson’s story is a must-read for all Americans.

Born in 1898, Robeson entered Rutgers University. Rutgers had an all-male student body of 500—Robeson was one of only two Blacks. Robeson tried out for the football team only to have the white players purposely injure him. But he was not deterred. He made the team and the coach told the other players that anyone who hurt Robeson would be dropped. This episode of overcoming white opposition to his aspirations became a pattern in Robeson’s life. As would the protests that greeted Robeson when Rutgers played southern schools.

Robeson won varsity letters in four sports while also becoming one of only four Rutgers undergrads to be selected Phi Beta Kappa. He was elected valedictorian of his graduating class in 1919.

I wonder how many college football players to this day have garnered such academic awards. Paul Robeson was demonstrating himself to be an extraordinary person at a very young age.

Robeson went on to law school, enjoyed a remarkable worldwide acting and singing career, and much more. But Paul Robeson’s life resonates with us today for the political struggles he fought as a Black activist committed to social justice worldwide.

Robeson’s challenge to the white power structure would have caused him trouble had he solely fought for Black civil rights. But Robeson combined that with backing national and international social justice and labor movements. Robeson traveled to Russian  under Stalin and regularly promoted “left” struggles across the globe.

Robeson’s stature was such that he gained a meeting with President Harry Truman in 1946. Robeson urged Truman to pass an anti-lynching law, which was not in the political cards. Instead, after the United States fought a war for democracy and freedom, post-war America heightened its repression of those exercising such values in the post-war years.

FBI Director J. Edgar Hoover had long targeted Robeson. The deeply racist Hoover despised a Black man like Robeson who was outspoken on civil and human rights. When McCarthyism overcame America in the early 1950’s Hoover got his opportunity. Robeson’s FBI file deemed him a security risk and he was barred from traveling outside the United States for four years. This devastated Robeson’s singing career as Europe was his prime audience.

But as the title of the book’s last chapter puts it, Robeson was “bloodied but unbowed.” As the line from his most famous song on stage in put, Robeson was “Old Man River, (who) just keeps rolling along.”

If you don’t know Robeson’s remarkable story, this graphic novel offers an excellent opportunity to be inspired. Paul Robeson powerfully impacted his time, and persistent racism has not erased his legacy.