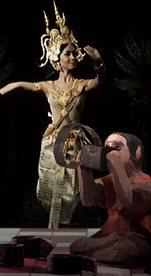 If veteran documentarian Rithy Panh’s new film is any indication, he has little use for political romanticism. Panh’s Cannes Un Certain Regard award-winner “The Missing Picture” shows how his family became part of the 1.8 million lives sacrificed on the altar of a new political system which observers claimed blended the ideas of Marx and Rousseau. This exceptional and necessary film, which opens April 4, 2014 at the Opera Plaza Cinemas in San Francisco, is partly an attempt to recapture some of Panh’s lost childhood and partly a harrowing account of his four years in several Khmer Rouge rural re-education camps.

A currently commonplace belief is that an event didn’t happen if it isn’t photographed or recorded. But what happens to the occurrence of an event when access to a recording medium is denied or tightly controlled? Redressing the existence of a history unrecorded at its occurrence is the aim of the titular missing picture.

Rendering truth at twenty-four frames a second was not the aim of the films permitted by Pol Pot and Khmer Rouge officialdom. The real goal was myth-making about life in Democratic Kampuchea (as Cambodia was re-named) for popular consumption. One such film excerpted by Panh depicted smiling workers happily harvesting bountiful fields. Those images dryly amuse the filmmaker as the land he and his fellow workers worked to physical and mental exhaustion was either arid or unsuitable for bringing large harvests. Yet as the unfortunate fate of cameraman Ang Sarun showed, recording film footage showing Kampuchean workers were actually ragged exhausted people living in grass huts earned one an instant ticket to lethal torture palaces such as S21.

Little film footage exists of Panh’s pre-1975 family life or of unbiased portraits of life inside the re-education camps. The filmmaker overcomes that shortcoming by using carved and painted clay figures placed in dioramas to reconstruct those lost times. The Panh family gatherings feel filled with laughter, music, and color. By contrast, the re-education camps are killing machines which use exhaustion, indoctrination, and starvation to destroy its victims.

Panh’s use of these clay figures delivers an effect that would be lost by using live actors to dramatize his recollections. With a look that suggests a mix of folk art and Edvard Munch’s “The Scream,” these figures manage to evoke the psychological and physical suffering Panh and his fellow workers underwent without causing viewers to mentally shut down and avoid absorbing further details of Panh’s experiences.

Another emotional effect created by these clay figurines comes in the moments when vintage footage either plays in the background or is projected onto a flat foreground surface. The film scenes feel like Khmer Rouge attempts to use cinema to overwrite or exclude Cambodia’s past and unacceptable parts of the present. The figurines and the dioramas serve as visual symbols of the inconvenient truths which don’t fit in official Khmer Rouge mythology.

Panh ultimately uses the figurines to evoke the personal transcendence that the cadres could not crush. His brother was probably arrested and killed for leading a rock and roll band. Children died painfully and slowly from starvation thanks to the cadres’ use of hunger as a means of social control. When the figurines of these subjects are seen flying in front of a space diorama, it feels as if their spirits have successfully escaped the Khmer Rouge’s intense social control.

Uniform black clothing and limiting personal property to just one spoon may have been mundane symbols of the equal society the Khmer Rouge claimed it was building. Yet, combined with the demonizing of education, art, and music, this so-called equal society seemed dedicated to crushing individual thought and glorifying mass dehumanization. Pushing people to accomplish unrealistic goals with inadequate resources exhausted any mental energy that could have been devoted to “rebellious” thoughts.

It also didn’t help that the Khmer Rouge’s version of social equality lived down to the revolutionary society described in George Orwell’s “Animal Farm.” All Kampucheans may have been equal. But the Kampucheans who belonged to the cadres and higher were more equal (e.g. were well-fed) than the non-cadre Kampucheans.

The Khmer Rouge’s hypocrisies went beyond eating well. Their rejection of Western influences mainly applied to the lives of the re-educated citizenry. Those workers had to make do with “revolutionary” traditional medicines and re-purposed Western technology. On the other hand, the cadres’ apostasy from the West didn’t apply to watches, pocket pens, or motion picture equipment.

The director doesn’t need to explain that his four years in Khmer Rouge re-education camps emotionally traumatized him. What he does show is how he avoided imposed dehumanization by occasionally recalling happier childhood times and by seeing a plane flying overhead.

Panh displays an understated anger at French leftists and others who accepted the Khmer Rouge’s equality rhetoric at face value. Even visiting Chinese officials mistakenly believed Kampuchea implemented the Great Leap Forward correctly rather than stumbled into mass starvation and uncontrolled illnesses.

Could it be reasonably argued the experiences of Panh and other “re-educated” Cambodians represented a sort of karmic justice? The filmmaker’s pre-1975 life of books and visits to a director neighbor’s film sets were opportunities probably unavailable to the poorest Cambodian. Panh admits the Cambodian poor were regularly getting thrown off their land. America’s Vietnam War-era bombing of Cambodia certainly wasn’t aimed at toppling the existing Cambodian government.

Yet if sociopolitical justice was the goal, reality suggested the benefits didn’t flow to anybody outside the Khmer Rouge’s higher levels. Poor people still dig ditches in Cambodia. Prizing ideological purity over humanity led to wrenching cruelties and betrayals. Forced confessions were less about actual guilt than reaffirming the correctness of the revolution. A 9-year-old boy’s public denouncement of his starving mother leads to the parent’s execution.

Pol Pot may have been the picture of guilt-free conscience over the Cambodian genocide he oversaw. Panh’s film provides a powerful reminder of what mass sufferings and inflicted torments Brother #1 chose to leave out of that tidy image.