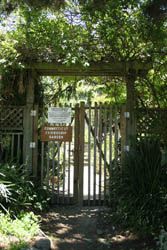 A Land Use Committee hearing today will determine the fate of a Potrero Hill community garden that some residents are charging the city is giving away. The owner of 695 Arkansas Street, Steve Lanza, has been petitioning the city’s Land Use Committee for a 1,600 square foot parcel to add to his adjacent property in order to expand his home. The parcel, home to the neighborhood’s garden, has been priced by the city at a mere $40,000.

The city’s low pricing of the parcel has drawn objections from the Save Potrero Open Space Committee, a community group. According to member Jeannine Vaughan, the committee estimates the value of the plot to be between $250,000 and $400,000.

Larry Ritter, the city’s real estate appraiser, denies lowballing. “That’s their opinion of value,” he says of the committee’s estimate. “We had it done through an independent appraiser,” he adds, noting that this appraiser paid special attention to the property’s past value.

But, Vaughan says, the Open Space Committee values the land differently, not only by factoring in the garden’s intangible community value, but by considering the average cost of property in Potrero Hill.

Moreover, she adds, the owner of 697 Arkansas can easily expand his home to the desired size without purchasing the additional land.

Ritter denies that claim, stating that legal restrictions require that the owner buys more land. “To build the square footage house he wants, he needs the land,” Ritter says. (Further calls to the Real Estate Division and City Planning Department Monday and Tuesday were unsuccessful.)

Vaughan and the Open Space Committee say that Lanza is willing to devalue his own property–and consequently, his neighbors’property–if the city rejects his purchase.

In an April letter to Potrero Hill residents, the Committee wrote that Lanza has threatened to sell a section of his lot “to a developer who could erect a large structure, thereby damaging the value of the neighbors’ property.”

Worst of all, Vaughan says, is the possibility that losing this open space will set off a domino effect.

If the deal ends up going through, she says, it “really sets a dangerous precedent for land grab in the city.”