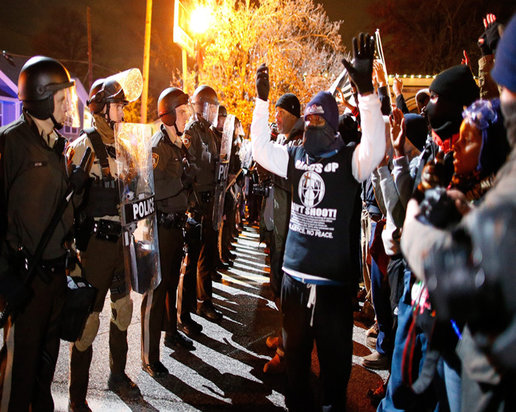 “”We are asking for more training for our officers,” said Lorian Reavely, 39 of Pasco, a protestor who stood in front of a sign reading: “Stop Police Brutality’…”

Everybody from police brutality critics to the director of the Federal Bureau of Investigation (FBI) and the commissioner of police in New York City now agree that “unconscious bias” can adversely affect police interaction with the public.

In a widely reported speech at Georgetown University last month, FBI chief James Comey noted that police officers “often work in environments where a hugely disproportionate percentage of street crime is committed by young men of color.” In such a setting, “no one’s really color blind,” he contended. “Maybe it’s a fact we all should face: everyone makes judgments based on race.” Whether an individual officer is white or black, he or she views young whites and blacks differently because the latter “look like so many others the officer has locked up.”

Would-be police reformers face two challenges arising from these tragedies. One is preventing or punishing police misconduct that involves brazen acts of brutality or explicit racism of the sort documented in yesterday’s Department of Justice (DOJ) report on policing in Ferguson.

Re-training To The Rescue?

One of the leading proponents of FIP is Lorie Fridell, a criminologist from the University, of South Florida, whose public safety consulting business began booming, post-Ferguson. Since 2010, Fridell has conducted seminars on unconscious bias for law enforcement officers from 250 local, state, or federal agencies. The DOJ’s Office on Community Oriented Policing Services (COPS) has invested more than $1 million in FIP training, and additional funds have come from local police departments, particularly those facing costly civil rights litigation or federal pressure to clean up their act.

The RPD’s much-improved relationship with a “majority minority” community has generated a steady stream of favorable media coverage at a time when many other local police forces are attracting only negative publicity, not to mention unruly street protests and DOJ investigations, like the one that Magnus assisted in Ferguson.

In other places where Fridell has worked—like Baltimore, Philadelphia, and Las Vegas—model behavior has been harder to find than high-profile examples of U.S. policing at its worst. In Baltimore, the city government has been forced to pay out nearly $6 million in court judgments and financial settlements in police brutality cases since 2011. As the Baltimore Sun found, “nearly all the victims in incidents that sparked the lawsuits were later cleared of criminal charges” and most were African-Americans.

In her training, Fridell employs a series of role plays designed to improve their handling of domestic violence calls, traffic stops, and reports of suspicious activity by young black males in white neighborhoods. One of her goals is to discourage officers from jumping to conclusions based on “their implicit association between Blacks and crime.” She illustrates the dangers of that by humorously displaying a slide of Martha Stewart hard at work next to a black celebrity guest in her TV studio kitchen. “Be mindful of stereotypes,” says the caption underneath. “Only one of them is a convicted felon.

When Fridell comes to town with her thick workbooks, academic articles, power-point presentation, and small group exercises aimed at identifying and rooting out bias, the initial reception is not always warm, given the subject matter at hand. “This is cops’ least favorite topic,” she says. When she and her fellow FIP trainers arrive in the classroom, their audiences “are generally somewhere between defensive and hostile because we have done a poor job of talking about bias in policing and they’re expecting the same old message.”

In non-accusatory fashion, Fridell explains the psychological research supporting her view that “modern bias is likely to manifest as implicit bias. Implicit biases impact on our perceptions and behavior. They occur below our conscious awareness. And they manifest even in individuals who, at the conscious level, reject biases, prejudices, and stereotyping.”

In addition to learning about “the science of bias,” FIP training participants acquire new skills for reducing and managing their biases. According to Fridell, her training is most effective when it includes community participants and takes place in the context of a department already engaged in institutional reform.

“Improving relationships with the community goes hand-in-hand with building greater trust,” Fridell says. She believes the RPD, under Magnus, took an important first step when it “got rid of some aggressive enforcement units” that left too many community members, who were blameless for crime, “feeling the coercive effect of law enforcement.” Plus, she notes, such “high discretion crime control activities can be a blunt force that comes with a high risk for unconscious bias.”

Police retraining, as a policy panacea, has its skeptics, both nationally and locally. In Richmond last week, one civilian participant in FIP training was Malcolm Marshall, the 42-year old, African-American editor of The Richmond Pulse. Marshall’s community newspaper has, in the past, reported favorably on the community policing reforms introduced by Magnus, during his nine years as chief in Richmond. When Magnus came under fire, in some law enforcement circles, for joining a “Black Lives Matter” vigil in downtown Richmond last December, The Pulse came to his defense.

“Of course, training can help, “ Marshall told me. “It’s a start but it’s not a cure all. It’s just a step in the right direction and has to be followed up. You can have a Chief Magnus but filtering it down to the rank-and-file is another issue. I don’t know if it got that deep.”

Tamisha Walker, a Richmond community organizer and mother of two, also joined the training and contributed to its small group brainstorming about further RPD “behavioral change, thinking change, and relationship building.” As Walker told NBC News recently, many Richmond residents long had an “us against them” view of the local police. Now, she says, “the relationship between the community and law enforcement is in a healing-type phase.”

Walker has spent time in jail herself and currently assists the formerly incarcerated as a staff member for Safe Return. Her Richmond-based group helps residents, who’ve been imprisoned, gain access to job training, employment, and affordable housing so they don’t end up homeless or back in prison.

“I think the police training, as it relates to the Richmond, could go along way toward helping officers who have not made the transition to having real community relationships,” Walker said. “I wish there could have been more community people there who have stronger opinions about law enforcement. It would have made for a better conversation.”

Walker also worries about the continued stigmatization and disparate treatment of residents with past convictions. “Law enforcement does not view formerly incarcerated people as having rights like regular community members. When a police officer pulls over a white guy, he doesn’t ask if he’s on parole or probation. People in law enforcement are more biased in their dealings with people of color, particularly with those with criminal histories.”

RPD officials who helped coordinate Fridell’s visit, welcomed the feedback of Walker, Marshall and other community representatives; they pledged to circulate a document containing recommendations made by all the training participants. “It was very empowering to have members of the community so involved,” said Richmond police captain Mark Gagan. ‘It’s just one more example of us wanting to harness all the resources out there.”

(Steve Early has been a resident of Richmond, CA. for the last three years and is currently working on a book about the city’s history and recent political transformation. He is a former union organizer and the author, most recently, of Save Our Unions from Monthly Review Press. He can be reached at Lsupport@aol.com)