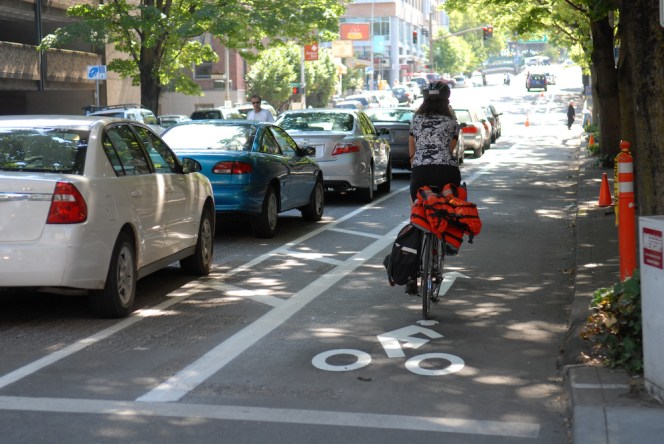 Portland officials have big ambitions for the city’s bike network.

In 2015, transportation director Leah Treat called for protected bike lanes to be the default on all major streets. But there hasn’t been a lot of progress on that front since then.

The city bureaucracy has been making internal adjustments to standardize protected bike lanes, Jonathan Maus at Bike Portland reports. Now, at least on paper, the Portland Bureau of Transportation is on the verge of a milestone with the release of new bikeway design guide.

Portland bicycle program manager Roger Geller told a group at Portland State University this week that the city has identified 450 miles of streets suited for protected bike lanes. The design guide is supposed to expedite that effort, Maus writes:

The bulk of the guide lays out different street cross-sections and suggests seven basic designs. This is meant to help city staff determine what’s possible given nearly any street configuration they come across — from a 76-foot wide, two way road to a 44-foot one-way road. The final guide will include an online spreadsheet tool that will allow engineers and project managers to plug in a specific cross-section and receive design ideas that will fit.

Let’s say PBOT plans to redesign a 36-foot wide roadway like NW Thurman, which today has two vehicle lanes and two lanes used for parking cars. Project staff could turn to this new design guide and see how to layout the street with six-and-a-half foot bike lanes protected from motor vehicle traffic with a one-and-a-half foot buffer zone that could be filled with a cement curb or plastic delineator wands.

Where designs beyond plastic posts make sense, this new guide will help PBOT determine what to use. It includes guidance on other materials that can be used for protection: traffic separators (curbs), concrete islands, planters, or parked cars.