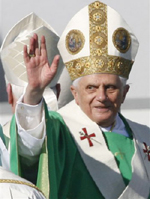 In an unexpected move today, Pope Benedict XVI announced that gays are no longer “intrinsically evil,” but only “somewhat intrinsically evil.” The Pope made what is being heralded in the religious world as a “groundbreaking concession” on April 1st, after a week-long international conference of LGBT Catholics was held in Rome. The Vatican had said that the conference would “tarnish the city’s exemplary history as a center for moral guidance to a decidedly heathen world.” The conference concluded yesterday.

Vatican police say that there were no problems with the thousands of attendees who came from all around the world, despite the fact that they staged a massive demonstration outside of the Vatican to protest recent comments by the Pope. On his first trip to Africa, Benedict XVI said that condoms “aggravate” the AIDS crisis and the only true prevention is abstinence.

Gay Catholic spokesperson Christina Wimpson, who heads up a chapter of Dignity (LGBT Catholics) in San Francisco, said that the pope’s comments of late have been “really over the top.” She said that the majority of people at the conference think it’s time for Dignity to “step to the plate and make a stink about the ways things are.” But the group couldn’t come to agreement about what to do.

“I assure you that you’ll be hearing from us,” she said.

In an address to thousands of Catholics gathered outside the Vatican for a blessing this morning, the pope said that gays are still not welcome into the church unless they’re celibate or ex-gays or lesbians.

“It’s time for healing,” the pontiff said to massive cheers from the flock below. “We embrace the homosexual not as intrinsically evil but as somewhat intrinsically evil. I pray, as we all do, that through God’s grace, he can find the path back to redemption.”

Further clarifying the pope’s statement, a Vatican spokesman told a leading Rome daily that “‘somewhat’ can mean a little bit or a not so little bit. It’s definitely a change, but how much of a change is hard to say,” said Father Guido Pieno Merda. He said that he anticipated no further changes in the Vatican’s policy on gays, at least not for a hundred years.

The New York Times, though, is reporting that a source close to the pope says that His Holiness will soon make “a revolutionary statement” on whether the Jews killed Jesus, a question that has plagued Christians since the religion began.

Just as they should do on abortion and homosexuality.