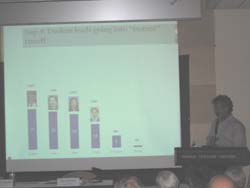 It’s a San Francisco tradition for local political junkies to gather at the SPUR Office on the day after an election to hear pollster David Binder’s analysis of the results. What was not traditional this year was the sheer exuberance that progressives felt about Supervisor Chris Daly’s hard-earned re-election victory. Roughly half the attendees showed up wearing bright green Daly t-shirts, eager to gloat about an election where the local and national outcome was extremely favorable for progressives. John Avalos, Daly’s chief of staff, could not contain his delight when the crowd filtered in to take their seats, as he led an impromptu chant of “Whose City?” “Our City!”

Local progressives rallied around Daly’s campaign three weeks ago when David Binder came out with a poll showing him ten points behind Rob Black. I asked Binder before he began his presentation if that infamous poll was conducted by telephone, and he replied that it was. When I pointed out that the vast majority of SRO tenants don’t have phones, he said that he knew that – and that he had warned people at the time that the poll under-estimated residential hotels. Daly won the election by ten points, in part because SRO tenants supported him by a 10-1 margin.

Nevertheless, everyone was eager to hear what Binder had to say – as he always provides a lucid analysis of the election results with his characteristic self-deprecation. Voter turnout in this election was about 57% — and as usual, a high number of San Franciscans voted absentee. In fact, there were still about 60,000 late absentees and 9,000 provisional ballots left to be counted. This may shift the results of the Community College Board race between John Rizzo and Johnnie Carter, but it will probably not make Kim-Shree Maufas lose the School Board race.

In District 6, there are approximately 3,000-6,000 absentee ballots left to be counted. While this may narrow the gap between Chris Daly and Rob Black, it won’t come close to the ten-point gap that currently exists. And because Daly at this point has 49.66% of the votes counted, he is guaranteed to win after the six other candidates in the race get eliminated through Ranked Choice Voting (the first candidate to receive more than 50% is declared the winner.)

Ranked Choice Voting will play a decisive role in District 4’s outcome, where candidates Ron Dudum, Ed Jew and Jaynry Mak have less than five points separating the three of them. Early polling, said Binder, showed that Chinese voters in the Sunset tend to vote for other Chinese candidates as their 2nd or 3rd choices. Therefore, Jew and Mak are likely to receive the votes from those who picked last-place candidate Houston Zheng as their first choice, as well as those who selected Doug Chan. On the other hand, Dudum will likely receive more votes from those who picked David Ferguson. At this point, it seems way too close to call a favorite.

In District 6, said Binder, Chris Daly rallied his base. A very polarizing figure, Daly aroused strong feelings one way or another — which made it the most closely watched race in the City. But according to Binder’s focus groups, District 6 voters made a distinction between Daly’s personality and Daly’s politics. While he had very high unfavorable ratings, many said that they would vote for him because they agree with him on the issues. It didn’t matter if they thought he had a temper that can sometimes “embarrass” the City, said Binder, because he’s also a passionate advocate for tenants’ rights.

The opposite appears to have happened in District 8 – where voters in a very progressive district re-elected Bevan Dufty. While many had trouble with Dufty’s voting record on the issues, said Binder, they liked him as a person. Dufty has developed a reputation as a hard-working Supervisor who pays close attention to problems with his District, and voters appeared to look beyond the fact that they may not agree with him politically.

In the School Board race, Jane Kim was a surprising first-place finish. As an Asian-American progressive, said Binder, Kim appeared to benefit from both progressive voting patterns in the City and ethnic voting patterns. Meanwhile, 16-year incumbent Dan Kelly came in a disappointing fifth place. While he was well known among voters, said Binder, Kelly lost because he did not get many of the same endorsements that he received in past elections.

Every local proposition passed except Proposition E – the parking tax. Even in a progressive city like San Francisco, said Binder, voters are not “pro-tax.” At the state level, all three tax measures (Propositions 86, 87 and 88) failed – showing that in California, “there’s always a net reaction to taxes.” On the other hand, all five bond measures on the California ballot passed.

Elsewhere on the state ballot, Proposition 85 (parental notification for teenage girls who want an abortion) failed by an eight-point margin. This was an almost identical result, said Binder, to Proposition 73 – an identical measure that was on last November’s ballot. When will the anti-choice zealots take a hint?

Proposition 90, the right-wing property rights measure, failed by a five-point margin. According to Binder, poll respondents overwhelmingly approved it at first – as they liked the message of “stop eminent domain.” But after a strong local campaign, along with many endorsements opposing it, voters were turned off by its draconian effects.

Finally, Cruz Bustamante was the only statewide Democrat besides Phil Angelides to lose badly. Bustamante has never recovered from his poor showing in the 2003 Gubernatorial Recall Election, said Binder. His Republican opponent, Steve Poizner, is also a moderate who voters were willing to give a try.