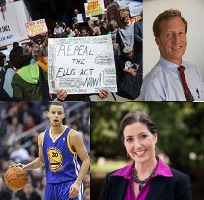 In 2014, California ballot initiatives could boost progressive change and the June and November ballots feature intriguing races for state offices. Oakland tries again to elect an effective mayor, and San Francisco features a high-profile Assembly race and initiative battles over the minimum wage, waterfront and Warriors pavilion. It has only one potentially competitive Supervisor’s contest. The most important San Francisco campaign in 2014 is legislative, as a broad coalition is assembled to get Sacramento to amend the Ellis Act to stop speculative evictions in the city. Here’s how I see the political events of 2014.

While there is no drama in the California Governor’s race —Jerry Brown will be handily re-elected—the November state ballot could offer enormous opportunities for progressive change.

The ballot could include Ron Unz’s minimum wage hike, Noreen Evans’ proposed 9.5% oil and natural gas extraction tax (an effort backed by billionaire and Prop 39 winner Tom Steyer), and a measure that would offer a California equivalent of the Deferred Action for Childhood Arrivals (DACA) memorandum that President Obama issued in 2012 for the immigrants known as Dreamers. Let’s examine each:

While labor has not embraced Unz’s plan (and some criticize it for not being indexed to inflation), it’s hard to see unions, Democrats and progressives not backing a measure raisingthe minimum a full $2 per hour above the amount currently scheduled. The politics of the minimum wage have changed since Governor Brown and Democratic legislators increased it to $10 in 2016; this amount does not look so impressive when fast food workers are demanding $15 per hour now.

Oil Extraction Tax: Tom Steyer is holding off on a signature drive while he funds a public relations campaign to win the 2/3 legislative vote needed to place Noreen Evans’ 9.5% oil and natural gas extraction tax on the ballot. But given past legislative opposition, Steyer may soon conclude that signature gathering must begin. Steyer proved with Prop 39 that he has the resources and savvy to defeat powerful corporate interests, and an oil extraction tax would generate billions of dollars a year for the state’s schools, housing, and other pressing needs.

Stopping Deportations: The prospects of California passing a state ballot measure next November to adopt a DACA-equivalent measure for all undocumented immigrants got murkier last week after Speaker Boehner said he will allow votes on “step by step” reforms. House votes would occur after Republican primaries, which are after the deadline for qualifying a California measure for the November ballot.

Should proponents of California moving forward hold off? I think not. The “step by step” measures will pick off the most politically popular constituencies (Dreamers, farmworkers, visas for high tech workers) leaving the majority without help. In contrast, if California shows the way, Illinois, New York and other immigrant-heavy states will follow, creating huge Latino voter turnouts in 2014 and 2016.

I find the most striking state race the controller’s contest between longtime State Board of Equalization member Betty Yee and current Assembly Speaker John Perez. While some see this race between an Asian-American and a gay Latino as driven by identity voting, Yee is backed by gay leader state Senator Mark Leno. Other LGBT leaders also back Yee, while Gavin Newsom has endorsed Perez.

If it comes down to which candidate better serves progressive interests, Yee wins hands down. The top finisher in June should win the November rematch.

Incumbent Jean Quan faces stiff challenges from City Councilmembers Libby Schaff and Rebecca Kaplan. Some progressives are trying to get longtime Oakland attorney Dan Siegel into the race, which is likely to occur.

In Oakland, unlike San Francisco, crime is a top issue. So is competency. Oakland’s back to back progressive mayors have not delivered, so that ideology may be less important in 2014.

Schaff has an edge as the candidate most identified with reducing crime. But ranked choice voting could make the other three progressive candidates the second and third choices of the other. Schaff can win, but only if she can secure a share of progressive votes by addressing affordable housing and other concerns.

If Schaff cannot expand her base, I like Kaplan’s chances because every time she runs her vote total exceeds expectations. Kaplan’s low negatives give her a real chance in a city whose last mayoral election was decided by ranked choice votes.

I last analyzed this race in September. Chiu remains the favorite given his broader base and greater legislative accomplishments. But Campos has solidified support among moderate gays, and is backed by Chinatown activist Rose Pak, whose candidates usually win. Campos has a better chance in the larger turnout November election. He needs to run a strong second to Chiu in June in order to prevent supporters and fence sitters from moving to Chiu after the primary. That’s why, contrary to what some believe, the June election matters a lot in this contest.

District Ten offers the only seriously contested supervisor’s race. Tony Kelly lost narrowly to Malia Cohen in 2010 and believes that changes in district lines (Portola is no longer in D10) and rising anti-development feelings in Potrero Hill have improved his chances. But incumbents rarely lose in district elections. Cohen has not alienated any key voting blocs, and she is a vigorous campaigner who will not be outworked. Kelly faces an uphill fight.

San Francisco voters will raise the city’s minimum wage next November. Mayor Lee backs the change, and the only question is how high the raise will be. Seattle’s new Mayor recently backed a $15 minimum pending further investigation of the impacts. I see San Francisco giving its low-wage workers at least a $2 per hour raise, with $15 certainly a possibility as the process proceeds.

Opponents of the Warriors Pavilion will put a measure on the June ballot requiring voter approval for any height increases on the waterfront. The Warriors will seek such height changes on the November ballot for their pavilion, and the June vote is designed to create momentum against the Warriors.

The Warriors pavilion is not 8 Washington. While few San Francisco voters outside the immediate vicinity cared whether upscale housing was built at 8 Washington, thousands are excited over the prospect of Steph Curry and the Warriors returning to the city.

A stand-alone vote on a new Warriors venue wins hands down. But if the Warriors include the proposed hotel across the street—which may be needed to help finance the pavilion—passage is no sure thing.

In the 1997 campaign for the 49ers stadium and shopping mall, the measure became less about the 49ers and more about whether the city needed another mall. The measure barely passed despite the team’s fervent fan base.

Combining the Warriors facility with other projects will lead opponents to describe the pavilion as a Trojan horse for unrelated waterfront development. Voters are still likely to back the Warriors, but victory will require a major grassroots effort.

As I detailed last month, the Ellis Act’s economic terrorism must be restricted in Sacramento next year. Restricting speculator evictions under the Ellis Act is the city’s single most important affordable housing issue in 2014.The city faces a crisis requiring a broad coalition, including developers and the tech industry, to weigh in for tenants. With everyone working together, I believe San Francisco can get the state Democrats that run Sacramento to prevent a tiny segment of one city’s real estate industry from continuing to damage people’s lives.

Randy Shaw is Editor of Beyond Chron. Join him for as he discusses his new book on activism, The Activist’s Handbook, Second Edition, at Books, Inc. at Opera Plaza in San Francisco on January 14, at 7:00 pm.