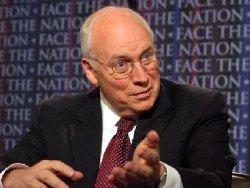 Who Can Rescue the GOP From Itself – and Bush-Cheney?

Today’s conspiracy is, per John Dean, “worse than Watergate;” Nixon didn’t organize torture or lie us into war. It’s one thing to commit high crimes, another to criminally use torture to fake war propaganda, successful or not. The most painful, double irony: the brutality was futile and less about saving America from terrorism than disguising world-shaking violence that to this day sacrifices Americans.

How long will a critical mass condone seemingly diverse crimes when shown to underlie the collective hijacking of independent agencies, just like Nixon, to cover up mayhem? The big difference, to this point – Nixon was caught, humiliated, and expelled from office – with countless aides jailed. Not only has no top Bush-Cheney adviser spent a day in prison, the incorrigible ex-V.P. pollutes the airwaves by rewriting history.

However implausible, ironic, or bizarre, the most effective, theoretical antidote to Bush-Cheney is Bush himself. Don’t gag: should not the duped Decider be allowed redemption and penance? My brainstorm, by the way, preceded the like-minded SNL skit Saturday. Not only can Bush raise the party banner while lowering the boom on zealous GOP misfits; considering fragile coalitions in both parties, steadying the GOP preserves the political status quo, inadvertently stabilizing Democratic Party interests, too.

This is not a prediction but a thought experiment to illuminate the GOP plight. I welcome your ideas, but understand, greater disruption will disturb all variables. Certainly neither brother Jeb nor fellow Floridian, Charlie Crist, will do, lacking Bush’s celebrity. Big questions are obvious: can W. perform any complex task, let alone bring courage or selflessness to sacrifice part of his dubious legacy for the greater good? Would he start by admitting error or stating regret (fat chance!), the best way to free Republican destiny from past dishonors? The plan has flaws, admittedly, but consider big payoffs for the GOP, Bush and family, especially keeping alive Jeb’s national dreams (under 65 in 2016). Without rescue, Jeb is “another bad Bush,” already besieged for not worshiping Reagan.

Dubya Gets His Do-Over

Motivation? W. venerates “decorum and protocol,” Maureen Dowd claims, angry with Cheney’s raucous disrespect to the presidency. Bush reportedly “doesn’t appreciate Cheney acting out . . . giving the whole party a black eye just as Jeb is out there trying to renew the party.” All Bushes should hold Cheney culpable for utterly desecrating the dynasty. Tactically, double-stumping (or stomping) Bushes will galvanize an army of pragmatic loyalists (Rove, Condi Rice, even Colin Powell, have legacies to save) plus insiders fed up with Limbaugh the ludicrous loudmouth. This restoration returns Bush and Rove to strengths: cheerleading, PR, and revisionism. Drooling FOX News would die, milking this comeback story 24/7 for years.

Centering the GOP, whoever does it, thus satisfies 80% of the electorate and party leaders. Democrats can generously stand aside while “New Republicans” take years to restore lost prestige and develop new messages, ideas and leaders. Who won’t welcome a rational, less cockamamie opposition? A centrist-right GOP wanting power and eventual election victories inclines to bi-partisanship.

All in all, W. is the one because America loves comeback-redemption soap operas, especially by pathetic, mighty sinners who have fallen down hard. Like a grinning TV survivor, W. returns from the dead, miraculously born-again politically. After all, no publisher now wants W.’s boring memoirs reliving his multiple falls from grace. But imagine, if the final panorama doesn’t depict ignominy but selfless rescue of his party, even aiding his country.

Of course, this miracle transformation won’t be possible until the current torture-conspiracy-corruption fades. Rebuilding Republicans write off 2010 anyway, prepping for ’12. Sure, my notion is bizarre and unrealistic, but that’s more of a plan than Republicans have now.