Next Steps Against Police Shootings? 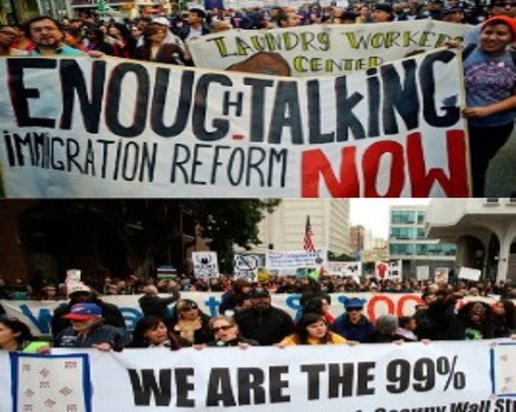 It’s been two weeks since the Ferguson grand jury ignited a new wave of protests against police shootings of African-Americans, and a week since the Staten Island grand jury added fuel to the fire in the Eric Garner case. Keeping in mind that protests are a means to achieve a goal and not an end in themselves, the campaign for police reform now faces a choice between two visions for its future: it can follow the path of the Occupy movement of 2011 or the route immigrant rights activists chose after the mammoth spring 2006 protests.

The street protests and freeway blockades in Berkeley and Oakland this week closely resembled the middle to late stage of the Oakland Occupy movement. The building of organizational infrastructure is bypassed in exchange for spontaneous protests. The targeting of forces responsible for police practices is subordinated to a message of “no justice means no peace,” with drivers on interstate 80 and various business  paying the price of this disruption.

Occupy put income inequality at the center of national politics. It’s critique of the United States as divided between the “1%” and the “99%” now defines much of the country’s political debate.

But for all the brilliance of its social and economic analysis, the Occupy movement’s heyday lasted less than three months. I analyze the rise and fall of Occupy in my book, The Activist’s Handbook, 2nd ed, but the short version is that it never implemented the nuts and bolts organizing tactics necessary to sustain grassroots movements.

Occupy’s lack of structure, long meetings and lack of specific agenda also rendered participation difficult for those with kids or full time jobs. Some people want to do more than constantly confront police, yet that’s what Occupy Oakland protests  became.

After millions took to the streets in nationwide marches in 2006, immigrant rights activists faced the same choice that Occupy faced and that police reformers now must address. Do you institutionalize the movement through building organizations and political alliances, or do you bypass traditional grassroots movement building methods and focus on ratcheting up street protests to ensure “no business as usual” until immigration reform is enacted?

Immigrant rights activists chose the former. Backed by two large institutions with a profound self-interest in Latino immigrants—labor unions and the Catholic Church—there were resources available to turn the immigrant rights movement into a powerful national political force whose clout went well beyond the ability to block a freeway or street.

By the end of 2009, it looked like the immigrants’ rights movement had become too institutionalized and “mainstream.” The movement allowed new President Obama to avoid keeping his campaign promise to prioritize comprehensive reform, and a year with Democrats controlling Congress ended without a serious legislative effort.

But because immigrant rights activists sought to build an ongoing movement, and not just rely on spontaneous protests, they had the capacity to take to the streets and suites to push their demands. And when Republicans filibustered the death of the Dream Act at the end of 2010, young activists kept up the pressure on Obama until he was forced to implement legalization for young Dreamers administratively in 2012.

This victory was then followed by further pressure on Obama to protect other immigrants. It took longer than expected, but the organizing prowess of the movement paid off when Obama’s Executive Order covered as many undocumented immigrants as his legal authority would support.

The immigrants’ rights movement is a model for showing how organizational building and real grassroots organizing does not have to come at the expense of direct action. Activists must play both inside and outside games to win campaigns. Direct action was just one of the Dreamers many tactics; they would not have won if it were their only tactic.

In July 2013, young activists calling themselves the Dream Defenders occupied the Florida Governor’s office for over a month to protest racial profiling. It is the type of action that a national police reform campaign could replicate across the nation in the months ahead.

Which Way for Police Reform?

If videotaped police violence was sufficient to end such practices, the Rodney King video would have solved the problem two decades ago. There is no substitute for enacting specific reforms (independent prosecutors, body cameras, improved training, civilian review commissions are among them), and this will not happen without labor unions, civil rights groups, and community organizations using the full array of activist tools.

The time to seize the moment is now. The December holiday season will likely put major protests in the campaign against police shootings on hold. The campaign has benefited from the fact that  the Ferguson and Staten Island decisions occurred when the media had no major competing stories. Come January, however, the national narrative will be dominated by “Obama v. Congress.”

This means that the police shootings could become “last year’s news” unless the public starts seeing specific, targeted actions that go beyond freeway closures, die-ins and confrontations with local police. There are so many politicians and business interests vulnerable to pressure campaigns over police shootings that it is time for activists to begin going after them.

The immigrants’ rights movement proved again that savvy activists can overcome powerful adversaries.The same is true for the campaign to stop racially based police shootings.

Randy Shaw is editor of Beyond Chron. He charts the growth of the immigrants’ right movement in his book, Beyond the Fields: Cesar Chavez, the UFW, and the Struggle for Justice in the 21st Century