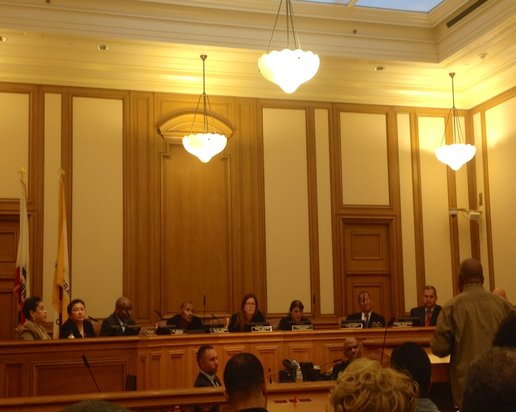 In a major victory for the Tenderloin, San Francisco’s Police Commission voted 6-0  last night to expand the boundaries of the new Tenderloin police district from Larkin to Polk Street. Tenderloin residents, merchants and nonprofit groups have pushed for this extension of Chief Suhr’s proposed boundaries since they were announced last December. Yet they ran into a roadblock as Suhr staunchly opposed this change.

Loftus’ leadership proved decisive. Her commitment to the process of public input, in this instance, from low-income residents of the Tenderloin turned what many assumed would be a neighborhood defeat into a victory.

The Tenderloin also got strong support from my onetime Hastings Law School classmate, Commissioner Petra DeJesus. Loftus, DeJesus and fellow commissioners understood that you can’t hold a public process to solicit input on redistricting and then ignore what the vast majority at the hearing say. As Commissioner Thomas Mazzucco put it, “What I’m voting for tonight it is a direct result of the Tenderloin’s efforts. I’ve never seen anything like {the tenderloin police commission public hearing on redistricting}.”

San Francisco’s new police district boundaries were a non-issue across the city. But they were a top priority in the Tenderloin.

A key reason was structural: the boundary at Larkin allowed it to become a thoroughfare for narcotics dealing and the violence that accompanies it. Therefore, moving the boundary to the more economically vibrant Polk Street provides Tenderloin police an opportunity to disrupt this historic pattern.

Tenderloin residents in attendance at last night’s hearing were thrilled. Gail Seagraves told Beyond Chron,  “I live on Eddy Street between Larkin and Polk and I know that I will feel safer with the new map. Thank you for listening to the Tenderloin.” Maricruz Verdugo echoed Seagraves,  “I represent the Latino voice in the tenderloin and want to say thank you to the commission because we feel our children will be safer in the community with the new district boundary”

Karin Drucker, a community organizer with the Central City SRO Collaborative (CCSROC) who played a leading role in mobilizing around police redistricting, observed, “Tenderloin residents have waited far too long for their neighborhood to become safer. Changing structural features—like the district boundaries—to deter violence and drug activity near where vulnerable families and seniors live, as in the case of Larkin Street, helps accomplish that.”

The Tenderloin has an historic shortage of police officers. Depending on how numbers are counted, the Tenderloin either has 25% or 33% fewer officers than in 2009.

Tenderloin residents and workers find this decline outrageous. But while increasing police staffing in a neighborhood with excessive public drug dealing seems like an obvious move, bad decisions made years ago left a police force understaffed overall.

While the Tenderloin is slated to get additional officers from the latest Academy class on April 25, the creation of a new Tenderloin police district is the most immediate strategy to get the neighborhood the resources it deserves.

That’s why the Tenderloin district boundaries are so vital. Those claiming that “it’s all about resources, not boundaries” fail to understand that the boundaries determine resources; that’s why leaving Little Saigon outside the original Tenderloin station has been such a problem for businesses there.

Initially, Tenderloin activists asked that Tenderloin Police District exclude Westfield Centre because they believed that shoplifting’s demands on the police would compete with attention to the neighborhood.

However, once Chief Suhr made clear to activists that including the area surrounding Westfield Centre was the only avenue to secure significant additional staff for Tenderloin Station, activists agreed that including the mall is a necessary compromise. In any event, once Westfield was staying in Tenderloin station it became imperative that key Tenderloin blocks between Larkin and Polk Streets were included as well so that vulnerable residents in that area could get the protection they deserve.

Both the Commission and Chief Suhr ultimately proved responsive to the voices of the over 400 people from the Tenderloin who weighed in on the redistricting issue. Suhr is San Francisco’s most politically astute chief since Al Nelder (1969-72) and knew not to overplay his hand. Suhr got most of what he wanted and avoided a big fight.

The new district boundaries begin in June. Tenderloin residents are optimistic that the decisions from President Loftus and other commissioners will significantly improve neighborhood safety.

Randy Shaw discusses the Tenderloin’s long battle against crime in his new book, The Tenderloin: Sex, Crime and Resistance in the Heart of San Francisco, available April 21. Shaw speaks about the book at SPUR on May 5.