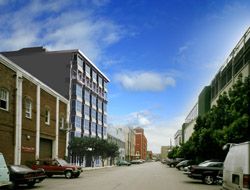 On Thursday, the San Francisco Planning Commission will consider legislation to limit the construction of 400 square foot studio apartments (defined in the Code as SRO’s) in the Mission, Chinatown, and the South of Market. The measure has aroused strong opposition from such neighborhood activists as Jim Meko of the South of Market Leadership Council, who fears it will reduce housing options for the city’s working class. The bill raises important questions about the city’s rental housing market, but the answers to these questions should cause the Commission to reject the measure.

City law encourages the construction of small studio apartments in mixed-use residential neighborhoods by reducing parking, open space and rear-yard requirements. But the recent approval of two for-profit SRO projects in the South of Market has prompted the introduction legislation limiting occupancy in future projects to those earning no more than 50 per cent of the area median income.

According to a fact sheet supporting the legislation, waivers of requirements applicable to other types of housing developments should not be granted unless the housing built is “affordable.” He argues that SRO’s renting at market-rate “does not meet the need of the populations that have traditionally depended on this type of housing. If SRO (sic) isn’t affordable, what is the point of it”?

This is an interesting question, but proponents of this legislation will not like the answer. The market for small studios is comprised of the same working-class individuals that has long sought such housing. The problem is that there is an acute shortage of such housing units, which is why efficiency apartments at buildings like the Cosmopolitan Apartments at 225 Hyde—-where both Jim Meko and Supervisor Chris Daly once lived—have seen their rents more than double in the past decade.

Small studios of the type to be built under the current SRO law are projected to rent for under $900 per month. These market-rate studios are actually cheaper than the $952 monthly rent allowed to be charged under the city’s law requiring private developers to make 10-17 per cent of their new units “affordable.”

SRO’s are commonly understood to be 80-150 square foot rooms with no kitchen and often without private baths. This is not the type of housing addressed by the SOMA legislation, so speaking about the need for new housing to address the historic SRO population is confusing apples and oranges. The housing at issue here is studio apartments with kitchens and private bathrooms of no more than 400 square foot, which for some inexplicable reason are defined as SRO’s in the Planning code.

Proponents of the legislation claim that, unless income limits are imposed, these newly constructed SRO’s “could become second or third homes for the affluent.” But we certainly have not seen rich people renting out studio apartments in the Tenderloin for occasional stays, and the assumption that wealthy people want to spend Opera night in an efficiency apartment rather than a luxury hotel is misguided.

Here’s the truth: affluent people from outside San Francisco would rather spend $900 for a few nights at Chip Conley’s new Hotel Vitale with its beautiful views of the Embarcadero and San Francisco Bay than rent an efficiency in the SOMA for the month at the same price. The claim that new SRO’s will serve the wealthy reflects a fundamental misunderstanding of the social mores of upper-income people.

Proponents of the SOMA legislation could argue that if working-class people will be the sole market for the new SRO’s, why not impose income restrictions? There are three main reasons.

First, Charles Breidinger, who has won approval for a new SRO on Bluxome Street, questions whether lenders will finance for-profit, all below-market rent projects where there are no tax credits or rent subsidies. Lenders are already skittish about financing projects without parking, and imposing rent limitations on all units could prevent desperately needed housing for working people from getting built.

Second, the legislation imposes greater affordability restrictions (50 per cent of median income) than are imposed by the city’s inclusionary housing law (60 per cent). This would lead to the bizarre result whereby the city-mandated “affordable” units are more expensive than the other units.

The proposal’s imposition of the 50 per cent affordability figure should raise doubts about the legislation’s true intent. Sue Hestor, widely described as the drafter of the legislation, recently testified against an affordable housing project at 785 Brannan whose income limits were also set at 50 per cent of median. Given Hestor’s opposition to precisely the type of project she now claims to support, it is easy to conclude that the real aim of the proposed legislation is to set income limits so low that developers will not build new SRO’s.

Beyond Chron has long argued San Francisco should lower the 60 per cent affordability rate prescribed by the city’s inclusionary housing law. But if the Board of Supervisors is going to allow highrise condo developments to provide no units at less than 60%, then imposing a 50% requirement for every unit in far more affordable SRO’s makes no sense.

The chief difference between luxury housing and new SRO’s is the latter’s waiver of parking requirements. But most progressives oppose the 1-1 parking requirements for all housing, and would support the much lower 20 units to one parking spot.ratio applicable to new SRO’s. Consistency would require that the legislation be amended to impose both building-wide affordability restrictions and a 20-1 parking ratio for all new residential projects.

This is the crux of the problem with the proposed SRO legislation: it attempts to address a citywide housing affordability problem by making it less likely that affordable housing will be built.

The Planning Commission and Board of Supervisors should revisit its entire approach toward approving market-rate housing rather than creating unique affordability rules for new SRO’s.