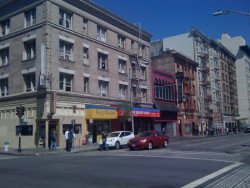 When six people were shot outside of Grand Liquors in February, it reinforced all the worst stereotypes of the Tenderloin. But the neighborhood is fighting back against this image, and there are basic steps that the City can take that don’t involve more cops or more arrests. Residents have been upset for years that the Tenderloin is a “containment zone” for criminal activity never tolerated in more affluent communities. On September 10th, the Planning Commission can do something about it by denying a liquor license application. Grand Liquors is relocating to 90 Turk Street – on a block that already has a liquor store, a porno shop, a convenient store, a bar, and four residential hotels – and it has applied to transfer its liquor license to the site. At a time when the new Police Chief wants to “crack down” on the Tenderloin, the City can actually prevent crime by making basic land use decisions that have a profound effect. And a broad coalition has emerged to oppose the liquor license, giving hope for the block’s future.

It has been over two years since 100 Tenderloin residents – mostly families with small children – marched through the neighborhood to demand an end to the violence. During this time, groups like the Tenderloin Community Benefit District have taken steps at creating a positive neighborhood identity to empower residents. Efforts are underway to transform Taylor Street into an Arts District, while NOMNIC works to attract small businesses to the area. But while the neighborhood has benefited from a police captain who truly engages the community, problems in the Tenderloin still persist.

Which is why we were alarmed to learn a few months ago that Grand Liquors – where six people were shot at this past February – had entered in a lease agreement for the space at 90 Turk Street. The building owner, David Kaplan, is regarded as one of the worst slumlords in the Tenderloin. In 2001, he was sued by the City Attorney for habitability violations at the Warfield Hotel (an SRO housed in the same building as 90 Turk), which resulted in massive renovation work on the property. Community groups had previously attempted to rent the space at 90 Turk from Kaplan, but negotiations fell through because Kaplan was asking for too much money.

Extensive outreach in the past few months has proven the neighborhood does not want another liquor store on the block. Families who live at 57 Taylor Street (next to Grand Liquor’s current location) have expressed fear about coming home in the evening, due to the crowd attracted by the liquor store. Tenants at the 120-room Aranda Hotel (right next door to 90 Turk) complain that the street is already unsafe, as residents must elbow their way through drug dealers and loiterers just to go to and from home. Other SRO residents have a history of drug addiction and alcoholism, and have shared horror stories about the constant temptation of relapse that comes from living in close proximity to a liquor store.

Karim Rantisi, the proprietor of Grand Liquor, has re-named his business Tip Top Market – and has told the neighborhood he is opening a “grocery store” to serve the area’s needs. Nobody argues the Tenderloin needs a genuine grocery store, but the construction work at 90 Turk already shows a large portion of the commercial space devoted to beverage coolers. The question is not whether Rantisi has the right to operate a business on the premises – it’s about whether the Planning Commission will give him a liquor license.

The Tenderloin – and specifically the unit block of Turk Street – has been under fire recently for drug and criminal activity, with the City’s new Police Chief saying he wants a “clean sweep” of the area. But more arrests will not stop the cycle of crime and violence in the neighborhood. What we need is smart, sensible solutions that can help deter this activity before it happens. And that’s where preventing another liquor store – which the neighborhood doesn’t want anyway – on a troubled block comes in.

Can a small land use decision like this have a big impact? In July 2007, Tenderloin residents asked the City to remove a bus shelter at the corner of Turk & Hyde – which was attracting a criminal element right in front of a playground. Taking out the structure had a noticeable effect on the surroundings. Mothers reported that the playground became cleaner, because loiterers would stop hanging out in front of the bus stop – leaving empty beer cans and syringes in the playlot. Blocking a liquor store can have a similar effect.

The neighborhood will be in full force at City Hall on Thursday, demanding that the Planning Commission do the right thing. The Hearing starts at 1:30 p.m., in Room 400. The Central City SRO Collaborative will be meeting with residents in its new office at 48 Turk Street at 12:00 Noon, before marching down Turk Street towards City Hall.