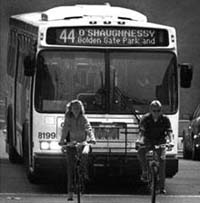 The Recreation and Park Commission unanimously approved a plan last night to create a second entrance to a parking garage being built in Golden Gate Park. The plan would call for widening Martin Luther King Dr. to four lanes, allowing motorists access to the new de Young museum and Academy of Sciences on the southern edge of the park via 9th Avenue.

The decision represents what could be the final step in a process started six years ago, when voters approved Proposition J. The initiative called for the building of the garage to create a “pedestrian oasis” and to lessen the impact of cars on the park – two things opponents of the plan say voters ended up with anything but.

The building of the parking garage has caused a long and contentious battle sparked by claims that the non-profit in charge of building it, the Golden Gate Park Concourse Authority (GGPCA), has tried to build the garage as quickly as possible, without adequate public participation and without adhering to the strict guidelines of Prop. J. The GGPCA has already been stopped once after a judge ruled their plans for an entrance to the garage within the park illegal. The widening of MLK represented one plan among several designed to allay the judge’s concerns.

The Commission’s vote came following more than two hours of public comment. Those speaking in favor of the widening consisted almost entirely of representatives from two groups: Richmond residents who believe the southern entrance will decrease traffic in their neighborhood, where the first entrance will be located, and members or allies of the GGPCA.

Those opposed to the widening represented a broad coalition of interests, including pedestrian advocates who believe the plan puts seniors and disabled users of the park in great danger, and the Bike Coalition, who objects to the new plan forcing bicyclists to share a lane with buses. The coalition also included neighborhood groups in the Haight-Asbury and Cole Valley, Inner Sunset merchants, Transportation for a Livable City, the San Francisco Green Party and the Sierra Club.

Representatives of this coalition raised objections concerning the lack of public input in the planning process, the destruction of green space as a result of the widening, and the possibility that the plan could seriously slow down nearby transportation lines. They cited studies showing the widening will likely speed up traffic, putting bicyclists and pedestrians in danger. Opponents also pointed out that it will likely increase car trips to the park instead of promoting alternative forms of transportation.

Despite the Commission’s approval, the future of the plan to widen MLK remains uncertain. Under the terms of the lease which the GGPCA is operating under, the Board of Supervisors has ultimate jurisdiction concerning traffic circulation issues in the park. Katherine Roberts of Trees not Cars, one of the foremost opponents of the widening, says she will likely now take her case to the Board, where she already believes she has allies.

“One thing Chris Daly has told us,” said Roberts, “is that they might be able to widen MLK, but the Board of Supervisors can prevent motorists from accessing the garage from that street, which would make this victory pointless.”

San Francisco Tomorrow’s Chris Duderstadt also has plans to draft an initiative he hopes to get before voters that would rendering the decision obsolete. He believes there would likely be widespread public support for such an initiative, citing thje more than 600 letters received by Park and Rec in opposition to the widening.

To Susan King, who spoke at the hearing as a representative of the San Francisco Green Party, a ballot measure represents one of the best ways to rectify the failure of the Golden Gate Park Course Authority to provide voters what they asked for.

“This plan does not represent what people who voted for Prop. J thought they were going to get,” said King. “It is not in line with the Golden Gate Park Master Plan. And despite what those people in the hearing said, it’s going to make it more dangerous for bicyclists and more dangerous for pedestrians.”