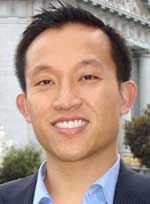 Tonight, the political group Plan C will host a forum with local candidates for Supervisor – but only those who pass its litmus test. David Chiu, who is running for Supervisor in District 3, was initially invited – but later disinvited. According to Chiu, Plan C did not approve of his endorsements by progressive Supervisors Tom Ammiano, Ross Mirkarimi and Chris Daly.

“It’s ironic that Plan C would disinvite me for that reason,” said Chiu, “because I’ve also been endorsed by people they support – like Kamala Harris, Phil Ting and Hydra Mendoza. A lot of my campaign is about bringing people together, and I’m proud of such diverse support.” On its website, Plan C claims to reject the “polarizing, divisive approach” of San Francisco’s ideological factions. Unfortunately, they’re a force for polarization — not unity.