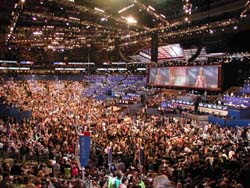 With the closest presidential primary fight in decades that ultimately comes down to delegates, San Francisco voters can pick on April 13th who will represent the 8th Congressional District at the Convention. 3 pledged delegates for Barack Obama (2 women, 1 man) and 3 pledged delegates for Hillary Clinton (2 men, 1 woman) will be elected at separate caucuses that are open to all registered Democrats in the area. A male alternate for Obama will also be chosen. The Obama caucus is at SEIU Local 1021 (350 Rhode Island), and the Clinton caucus will be at the Plumbers Union (1621 Market.) Doors open at 2:00 p.m. on Sunday.