Philz Coffee Coming to the Tenderloin 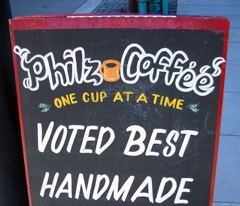 In the latest sign of the Mid-Market / Tenderloin’s revival since the city enacted a payroll tax exemption for net new hires, Philz Coffee will soon be opening at the corner of Golden Gate and Larkin Streets. Philz, the Blue Bottle for the hipster and nonprofit set, has a nearby location on Van Ness near Turk but saw the new location as a great opportunity to expand its market. Chief credit for Philz’ move goes to Hastings Law School CFO David Seward, who kept his prime corner location vacant until he could find a café that would be an asset to the neighborhood. And I am sure we will find Mayor Ed Lee at the official opening, as Philz owner Phil Jabar (who runs the company with his son Jacob) told me he “loves the mayor” and credits him for helping the central city’s resurgence.

Those knowing the history of the Tenderloin since the late 1970’s might find it remarkable to see Hastings Law School actually becoming a force for good. But its attraction of Philz Coffee is only the latest action in recent years that shows the positive impact Hastings is now making in the Tenderloin.

Philz’ opening follows a trend of positive developments in the area since the payroll tax exemption boosted incentives last spring. In September, the Academy of Art opened a fashion school at the historic California Hall, 625 Polk (at Turk). Across the street, Brenda’s is expanding its wildly popular restaurant featuring New Orleans-style cuisine.

The new SFPUC Building at Polk and Golden Gate opens next summer, and Maestro restaurant has signed a lease next door at the onetime home of Stars restaurant.

But Philz is likely to have the largest impact, as it fills a space that has not had a retail use for decades. Its highly visible location along a major thoroughfare and proximity to the Federal, State, and PUC Buildings, as well as to Hastings, virtually ensures its success.

Hastings’ Seward held out for a business that would attract people at night. Considering that Philz is filled morning, noon and night, Seward found the perfect match.