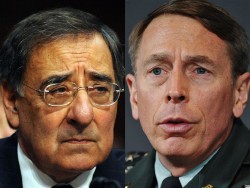 President Obama’s announcement that C.I.A. director and longtime Washington insider Leon Panetta will become Secretary of Defense, replacing Robert Gates, and that General David Petraeus will take Mr. Panetta’s job at the C.I.A. reflects the type of appointments that could have been made had John McCain won the 2008 election. Obama’s commitment to business as usual in foreign and military policy is consistent with his key economic policy appointments. In fact, one is hard-pressed to name a single top Obama advisor or influential Cabinet member who represents the break from the past that Obama promised voters in his 2008 campaign. Yet despite the President’s commitment to the status quo, he is cynically reviving old campaign themes for his 2012 campaign.

When John McCain faced Barack Obama in the 2008 presidential election, the Arizona Republican could not stop touting General David Petraeus and his allegedly successful “surge” strategy in Iraq. Petraeus has now become the go-to guy for Democratic President Obama, whose overall foreign policy agenda is little different from that of his former Republican opponent.

Is Petraeus running the C.I.A. really what change, Obama-style, looks like?

Absolutely. A President elected vowing to pursue “Change We Can Believe In” has dropped even the pretense of trying to move the nation in a direction different. The man who won the Democratic nomination by distinguishing himself from Bill Clinton’s tenure is now a less politically astute carbon copy of the moderate, Democratic Leadership Council-backed former President.

Here is the message Jim Messina, campaign manager for Obama for America, sent to supporters on April 25:

In the weeks and months to come, we’ll ask grassroots supporters like you to meet with one another and local organizers to take the first steps to victory on November 6th, 2012.

But before we begin meeting in living rooms and backyards across America, it’s important that we communicate with each other about a set of principles for the organization and our overall strategic thinking about how the race will shape up.

The most important aspect is this: Our campaign will be grounded in President Obama’s experience as a community organizer. This notion of ordinary people taking responsibility for the organization at the neighborhood level is not only the way to win, it’s also the way politics ought to work. Our campaign will be an example of innovation and efficiency, but it will also be an example of civic engagement at its best and most rewarding. (Emphasis added)

Messina must really have a low opinion of the intelligence of those who once believed that Obama’s community organizing experience would impact how he governed. Or else he assumes that people are unaware of the President’s recent slashing of two of the biggest organizing programs funded by the federal government – community service block grants and community development block grants.

As I wrote in describing Obama’s Reagan-like organizing cuts: “I have to give Barack Obama credit for convincing even longtime advocates for the poor and low-income neighborhoods – people like myself – that his community organizing background meant that we would have an organizer’s ally in the White House. Obama has instead proved disastrous for community organizing in the United States, from his knee jerk defunding of ACORN, to his ignoring the views of the grassroots base that won him the Democratic nomination, to now his efforts to defund what little is left of Lyndon Johnson’s Great Society.”

The Obama campaign is in for a surprise if it thinks it can sell Barack Obama in 2012 as an agent of change, particularly to grassroots activists.

Instead, the President’s strongest selling point is as a force for the status quo in the face of Republican extremists seeking the wrong-type of change by attacking the social safety net.

Barack Obama is clearly more comfortable promoting business as usual. He will be as convincing selling this message in 2012 as he was in marketing “Change We Can Believe In” to reach the White House.

Randy Shaw is the author of Beyond the Fields: Cesar Chavez, the UFW and the Struggle for Justice in the 21st Century, as well as The Activist’s Handbook.