Peter Norton: History Can Show Us How to Transform City Streets Again 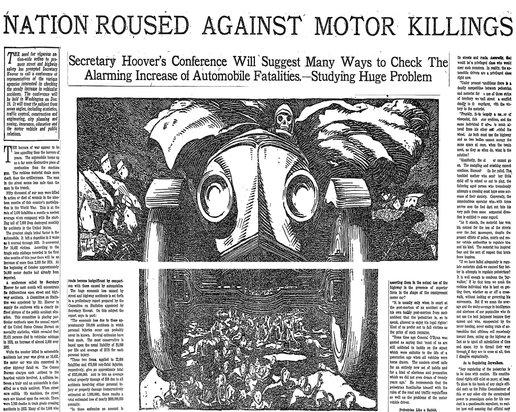 America did not turn over city streets to cars without a fight. This is a New York Times story from 1924. Image via 99% Invisible

Streetsblog Denver interviewed University of Virginia professor Peter Norton as part of a series leading up to Tuesday’s Live.Ride.Share Denver conference on shared mobility. Norton will give one of the keynote talks.

Most people assume that our nation’s cities are designed for cars because that’s just the way we prefer things. But the story we tell ourselves about “America’s love affair with the automobile” is patently false, says Peter Norton.

Norton is a professor of the history of engineering and the author of Fighting Traffic: The Dawn of the Motor Age in American Cities. After Henry Ford invented the Model T, Americans did not joyfully embrace the motor age, he writes. In fact, there was a protracted, decades-long power struggle for city streets — people who were accustomed to walking in the street, to having their children play in the street, did not give up these rights without a fight. Eventually, the automobile industry won, and its victory was reinforced with the weight of massive government intervention in the form of bigger roads, parking mandates, single-use zoning, and other policies that favored driving and cars.

Denver, like much of the rest of America, is now on the verge of choosing a different path, one where people can conveniently and safely get around without needing a private car. But as Norton told Streetsblog Denver, attaining a future with walkable, bikeable, transit-rich cities depends on understanding the past.

What does a history professor have to do with urban transportation issues?

We all grew up hearing this story that the reason we have a car-dependent society is because we as a culture, as a people, as a nation embraced the automobile from Day One enthusiastically, eagerly. We also grew up thinking that this was an economically rational move. For example: This idea that traffic congestion on the highways causes N hours of delay which are worth X dollars an hour and therefore more money should go to highways. This is the kind of completely bogus story we’ve been fed since childhood. And to the extent that we believe it, to that same extent we won’t change it.

Are you saying cars aren’t as American as apple pie?

That’s not 100 percent wrong. This is the country that made the Model T. This is the country where, unlike in Europe, if you were gonna get from your farm to the market, your choices were not good. You needed a vehicle. But for most people who lived in towns and cities, cars showing up on your streets was mostly bad news. They weren’t thought of as city vehicles. People were hostile to cars because they crowded the streets, they closed down streetcars, they made the streets harder to cross, and they killed pedestrians, in particular children, in incredible numbers.

But these things are still happening, they’re just accepted as daily life now. How can you make people see the possibilities so they can actually choose to favor, fund, and accept other options?

I think a piece of the answer comes from history. We’ve completely forgotten — and it’s not by chance — that the people who wrote the history of the car in America, and the people still writing the most seen histories, are the auto industry. Go to the National Museum of American History on the National Mall in Washington. It’s taxpayer supported, it’s free, and it looks like the official history museum of the country. And you go in there and a huge fraction of that museum is given over to the history of the car in America. It’s in the General Motors Hall of Transportation, funded by General Motors and AAA, and you go in there and it’s a celebration of the car that everybody always wanted. 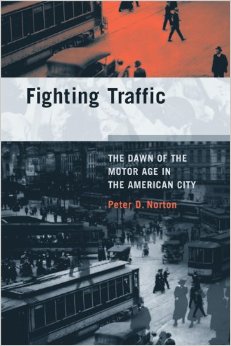 So that’s the history we’re up against. And that history totally misses the fact that it took one of the biggest public relations efforts, apart from government propaganda, in the history of the world. Just one illustration: In the early 20s, cars were killing kids in the streets in ridiculous numbers, honking at pedestrians, and making them angry enough to write to editors of newspapers that I combed through. The prevailing view was that cars don’t really belong on city streets. If they’re gonna be there, they better go very slowly and they better yield to pedestrians. That reflected the assumptions and preferences and unconscious convictions of most people. So what’s interesting is that all of that has changed — such that most people are favorable to cars. If they can be changed once, that means they can be changed again.

How did the auto industry achieve a complete cultural shift?

It was this very elaborate public relations effort by a broad coalition of interest groups that had a stake in the future of cars — manufacturers, auto clubs, auto dealers, taxi companies. They started to make pedestrians who were exercising their right of way — and until the 1920s the right of way of the pedestrian was being anywhere in the street at any time — look like idiots. And they were very clever about this. They said, ‘We’re gonna make it look like pedestrians don’t belong in the streets.’

They offered this service to newspapers across the country. The deal was this: Send them your accident information over the course of the year and they’ll send you back a detailed report that is professionally written and dropped into the newspaper as a trusted article. The thing of it was, when these reports came back to newspapers, they all blamed the “jaywalkers.” So it was a brilliant way to change the conversation and city ordinances that became the basis for the transformation of the rights of the pedestrian from unlimited access to the street, anywhere any time, to cross only at the crosswalk or when you’re not obstructing traffic.

So we need a broad coalition of sustainable transportation propagandists?

Well the lesson is, you can change people’s minds. How do you get people to consider alternatives they haven’t considered? I think the short answer is, they have to see the future that they can’t imagine. Take General Motors’ exhibit at the World’s Fair in 1939 and 1940. A lot of people saw that — millions. Millions of people saw the city of 1960 as General Motors envisioned it. The city they saw was a very vivid vision of the future. It was also a utopian fantasy. Because they were seeing a city where you could drive anywhere, anytime, without delay. You didn’t have to park. It was a very seductive fantasy of the future, and it showed multi-lane superhighways cutting right through the middle of cities. It didn’t show any of the destruction involved in that, or the fact that most downtowns in most cities converted to surface parking lots and parking garages by the 1960s.

So that strategy is certainly within the capacity of people like those in Denver, like Streetsblog, like Streetfilms. All kinds of organizations are taking advantage of the fact that you can depict things now, through the web, quite cheaply.

Automated vehicles seem to dominate conversations about the future of transportation, despite the existence of simpler, proven solutions like transit. Are we depending too much on this idea that unproven technology and apps will solve everything wrong with transportation?

KPMG published this report that said, ‘Hang on, Detroit. If you play your cards right, there’s actually going to be a future of privately owned vehicles.’ People will be driving them much more and wearing them out. They even say in this report that the average occupancy will drop below one person per car — because the car will drop you off at work and drive somewhere else — and that’s a fantasy for the automobile industry.

How can we combat that future?

This Denver event is a time when the other side is getting its act together. The autonomous vehicle isn’t “giving” us any one thing — we have to take what we want from it. I’d like to see more visuals where people are in their cars eating and drinking and watching movies in their cars as they make a 180-mile one-way commute to work in an America of almost continuous quasi-urban growth. Maybe a future where people send their kids off to play with their friends, picked up at their own door and dropped right off at their friend’s door. No more walking.

Or, next to that, a future where people are walking and cycling and when they need a car it’s there to pick them up and connect them to transit — so transit is actually enhanced, not diminished. A vivid picture of an alternative future might be a really helpful step in an alternative direction.

Ride-hailing companies like Uber and Lyft aren’t going anywhere, so how can we make sure they’re an asset in the future and not a competitor to transit, walking, and biking?

I’m actually quite comfortable with making them allies in a common cause. I’m willing to say to the Lyfts and Ubers, we may not agree on everything about what the future should look like, but I think we can all agree that the sharing component should grow. To the extent that we continue to drive, the more of that driving that’s shared-vehicle driving, the better. I think they would see that it’s very much in their interest to be in common cause with walkability, livability, bikeability and against the car industry’s idea of the future. They’re gonna want, for their own sake, to make their business model a sustainable mode. As a practical matter I’m happy to check them out to see if we have enough in common to work together for a future that isn’t dependent on privately owned cars.