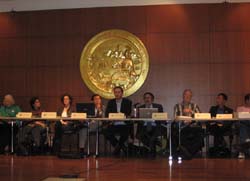 At a tense meeting last night in front of a packed audience, the S.F. Democratic County Central Committee (DCCC) voted 18-16 to pick Supervisor Aaron Peskin party chair over incumbent Scott Wiener. Assemblywoman Fiona Ma proved to be the swing vote for Peskin – as Wiener supporters hissed her proxy, Susan Leal. Accusations were made about threats to secure votes – while members stressed unity behind the DCCC’s mission: strengthen party building efforts, elect Barack Obama and run a coordinated down-ballot campaign. After the meeting, Peskin punted my question (see audio interview) about whether the Party would endorse in Supervisor races – which will be the next contentious question that the DCCC takes up. With Peskin leaving the Board of Supervisors, some had wondered where he will take his considerable political talents. Running the SF Democratic Party appears to be his next move.

It didn’t take long to see that Peskin had the votes, making the rest of the long meeting anti-climactic. Before the DCCC could pick a Chair who will run the Party for the next two years, a temporary Chair had to be chosen for that meeting. Motions were made to pick Peskin and Wiener, and a roll call vote was made that fell along party lines. When Peskin won the vote 18-16, everyone knew that it was over.

The audience (a majority of whom supported Wiener) hissed loudly when Ma’s proxy – former PUC Manager Susan Leal – cast her vote for Peskin. During the public comment period, many complained about the process – as they focused on Chris Daly’s tactics at persuading his DCCC colleagues. “I’m sure that Peskin did not orchestrate this,” said one speaker, “but the whole process ignored San Francisco. We need all San Francisco and all Democrats to participate.”

But the most dramatic moment came when Leal stood up to address the audience, and explained why – as Ma’s proxy – she would be voting for Peskin. “Friends, I got hit by a minibus. And I got hit by another political vehicle. You wanna talk about taking political hits? That’s me. Someone vociferously came to my aid – and that was Aaron Peskin. I know what it’s like to get knocked down.”

Other speakers – like Mike Casey of Local 2 and Ted Gullicksen of the San Francisco Tenants Union – vouched for Peskin’s years of advocacy. Some DCCC members who said they’d vote for Peskin had only good things to say about Wiener’s work as party Chair – but that this was about picking the best person. “My vote for Aaron is because of who Aaron is,” said Robert Haaland. “He has stood side-by-side with labor. We are so fortunate to have someone of his caliber on this Committee. Under Aaron’s watch, the Democratic Party will just soar.”

A running theme throughout the meeting was the need for Democratic unity. Once the Chair was chosen, the next task would be to do what the DCCC is set out to do – register more Democrats, raise more money and elect Democrats up and down the ballot. “Scott Wiener is not the enemy and Aaron Peskin is not the enemy,” said David Campos. “We as a Party have to be better than going after each other.”

“This is not a lot of fun,” said Peskin. “I have a lot of respect for Scott. We are all one dysfunctional family, and there’s been a lot of pressure on both sides.” But Peskin spoke about the progressive tradition that got him first involved – and how he was “part of that legacy” that transformed local politics in the late 1990’s. “Now our task is to bury the hatchet. I fundamentally respect Scott, and want to emulate his efficiency as Chair.”

The next question is how the DCCC will use its influence in local races – with Democrats challenging Democrats. In 2000, a progressive faction pushed a neutrality pact at the DCCC that the Party stay out of district races – paving the way for a crop of reform-minded candidates like Peskin and Daly to win seats free of the party’s interference. “I have yet to suss out what the feelings are with my colleagues,” said Peskin when I asked him whether the same will be done this year.

Last December, as Beyond Chron looked ahead at the upcoming year, Randy Shaw wrote the following: “San Francisco Board of Supervisors President Aaron Peskin has played an instrumental role in running the city, particularly in areas of planning, MUNI, and the city’s infrastructure needs. How can the city use his talents after he is forced by term limits to leave the Board at the end of 2008?”

After last night’s meeting, I think we all know the answer to that question. He will be running the SF Democratic Party – helping the party become a larger and more relevant force in politics.