Peskin In, Jail Out 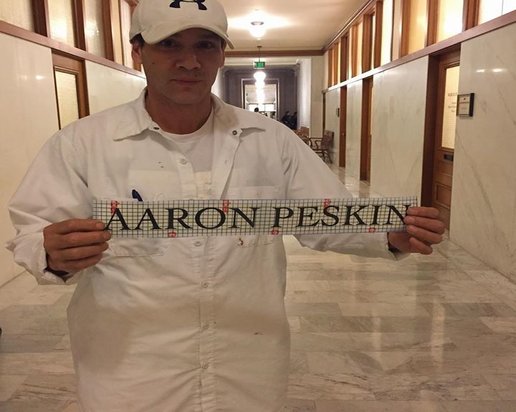 Aaron Peskin becomes the District 3 Supervisor on December 8, and will then join his colleagues in rejecting the planned new jail for San Francisco. There likely was a Board majority against the current jail plan even without Peskin’s vote (since London Breed’s district is against it and she is up for re-election), but his replacement of Julie Christensen ensures the jail’s defeat.

The multi-year anti- jail battle made a splash last week when opponents on December 2 shut down a Board of Supervisors committee hearing on the issue. But the planned new jail has been on the drawing board for years.

While the Supervisors vote on the jail is now breaking down primarily on progressive/moderate lines, the issue has split traditional allies. Longtime progressive Sheriff Mike Hennessy backed the new jail, and as recently as 2014 progressive Sheriff Ross Mirkarimi was “aggressively pushing plans” for a 640-bed facility. Jeff Adachi originally backed the plan before changing his position, and District Attorney George Gascon is a vehement opponent.

Gascon’s strong opposition raises a question: has any county built a jail over the public objections of the District Attorney? In case any supervisor was concerned about an anti-jail vote exposing them as “soft on crime,” Gascon’s opposition eliminates this issue.

Most opponents of the new jail associate it with the crisis of mass incarceration. I am just as troubled by the message it says about state funding priorities.

Supervisor David Campos made the key point in a recent tweet: after Governor Brown vetoed AB 35 and has refused to provide necessary state funding for affordable housing, it is wrong for California to instead offer San Francisco $80 million for a jail.

The late Ted Gullicksen helped form a group called Homes Not Jails. He formed that group in 1992, and the message of its name still resonates.

The Reverend Jesse Jackson used to say that the largest public housing program in the United States is its prison system. Since 1981 nationwide spending on jails exploded while housing funding plummeted. The connection between young people growing up homeless or without safe and healthy housing and subsequent criminal activity is the result.

The Board of Supervisors will be voting on whether San Francisco should issue a $215 bond to cover the portion of the jail cost beyond the state’s $80 million grant. So while city officials are normally loathe to turn down state or federal funds, in this case San Francisco would still pick up most of the jail costs—-which troubles the many supervisors who do not want to be perceived as putting jails instead of homes. Opponents also cite the availability of beds in County Jail No. 2 on Seventh Street and two facilities in San Bruno as alternatives to a new jail (there is no dispute that the current jail at 850 Bryant must go).

San Francisco can crackdown on public drug dealing in the Tenderloin and other neighborhoods without building a new jail. District Attorney Gascon would not be opposing the jail if this were not the case, and the San Francisco Police Department is not claiming that the proposed new jail is necessary for them to reduce street dealing.

In his December 3 speech on homelessness, Mayor Lee announced that he has instructed the police to aggressively target public drug dealing outside buildings providing services to homeless persons. Lee correctly noted that some of those seeking such services have left the drug world and should not have to be associated with such activities as part of their process of getting housing and recovering their lives.

The mayor did not condition the city’s ability to carry out this mission on the supervisors approving a new jail.

In a political year where Aaron Peskin’s political revival was arguably the dominant San Francisco political story, it is only fitting that on December 8 he arrives back from India, gets sworn in by the mayor, and then votes to defeat the proposed new jail.

Randy Shaw is Editor of Beyond Chron. For a fun and inspiring read this holiday season, get his new book, The Tenderloin: Sex, Crime and Resistance in the Heart of San Francisco