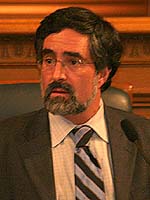 Whatever you say about Supervisor Aaron Peskin being a “deal-maker,” you gotta admit that he played the parking issue brilliantly. San Francisco could have passed a dangerous Downtown Parking Initiative this November, making us a whiter, wealthier traffic-jammed suburb with gas-guzzling S.U.V.’s and no regard for global warming. So Peskin added a provision to his Muni Reform measure that if voters approve will completely overrule the Downtown Parking Initiative. Now Don Fisher realizes that his Parking Initiative is dead, and has promised Peskin not to actively campaign for it – nor to oppose the Muni Reform measure. In exchange, Peskin has offered to submit a modest piece of legislation that may be put on the ballot in February.

In the Western Neighborhoods (as defined by District 1,2,4,7 and 11), current zoning law has a “one-for-one” parking policy. So a developer can build up to one parking space for each new unit of housing, but must get a conditional use for more. The Downtown Parking Initiative would have set “one-for-one” as a bare minimum – making it illegal to build less. Peskin’s compromise guarantees “one-for-one” as a right, while preserving the flexibility to build less – such as if a housing developer wants to build low-income housing along Geary where the tenants don’t own cars.

While this would guarantee “one-for-one” parking in the neighborhoods, Peskin also added conditions for building new off-street parking spaces: they (a) must be consistent with all development standards for the district, (b) cannot result in the removal of a significant tree, (c) cannot adversely affect a bicycle route, and (d) cannot adversely affect a Muni stop or route.

The last one is the most critical because it trumps what was by far the most offensive part of the Downtown Parking Initiative. In that initiative, a property owner could build a new parking space on the curb of their street – even if it meant moving (or getting rid of) a bus stop. It prioritized cars over transit; this measure prioritizes transit over cars.

What’s a bit more troubling about Peskin’s compromise is that it creates a new special use district in Western SOMA that would allow – but not require – for one large parking garage of 1,500 spaces, or up to 2,500 cars with attendant parking. This is the rough equivalent of building another 5th and Mission Parking Garage. But Peskin told me that it would only create the zoning for such a garage – and that it will not be built or spent with a dime of public funds.

The most important part of Peskin’s compromise is what it means for the November ballot. With Gavin Newsom, Kamala Harris and Mike Hennessey not facing a serious opponent yet – the filing deadline is August 10th, so someone can still enter the race at the last minute – there will probably be a very low turnout. This could have allowed the Downtown Parking Initiative to eke through, if Peskin had not added the parking provision to his Muni Reform measure.

But the voters will still have to approve Muni reform, and Don Fisher – upset that Peskin has defeated his initiative enough that he got the Mayor involved – could have thrown his millions to defeat it. With this compromise, Fisher and his Downtown business cronies will let the Muni measure pass and allow the Downtown Parking Initiative to fail, creating the best outcome that we could hope for in a low turnout election.

While progressives should still wage a campaign to pass Muni Reform, Peskin’s compromise allows us to look ahead to the February, June and November ballots – where the political climate will be more favorable. And in those elections, Newsom will not be on the ballot so he should not have many coat-tails.